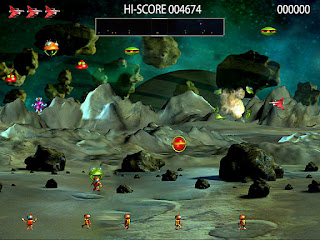 While we all love the hundred hour time-wasters of today, sometimes it’s good to revisit our gaming roots. Retro compilations are often the best place to do this, as they ease the pain of paying exuberant amounts of cash while also delivering sheer bulk.
Unlike other collections such as SNK Arcade Classics or Taito Arcade Classics, though, none of the games in System 3’s Arcade Classics: Volume One are from the arcade and their status as “classics” is up for debate.
That’s right, not a single one of these games is actually from the arcade. The games on offer either seek to replicate other titles from the past or bring something new to the games of yesteryear. With only six distractions, all lacking in any semblance of depth, this is a very dubious package. In fact, two of the games are eerily similar to one another and the lot of them follow the exact same rules.
The six games are Meteor Shower, Incoming, The Invaders, Bugs, Space Rescue, and Alien Raiders. While each game has its own little characteristics, nearly all of them take place on a lone screen (except for one, which is easily the most entertaining of the lot) and involves shooting. You’re given three lives to rack up as high a score as possible.
To be a bit more specific, The Invaders is essentially a clone of Taito’s Space Invaders. A large horde of enemies saunter left and right in a pattern whilst shooting occasionally, before gradually moving down to annihilate you. Alien Raiders is much the same, only with enemies that stray from the group to launch individual attacks. 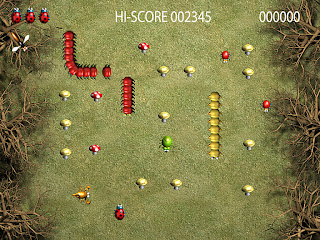 The other games don’t really warrant explaining, as every title in this collection follows the same basic formula: shoot and dodge. Each and every one is a shooter in some form, despite the ambiguous title “Arcade Classics”. Some variety here would have gone a long way toward making this feel like a collection, rather than the same game with different rule settings.
Meteor Shower and a few other games are either buggy or incredibly cheap in that dying automatically respawns you at the exact point of failure. This means it’s very likely that upon coming back to life, you’ll die instantaneously. Given that achieving a high score is the central goal of all six games, this is frankly inexcusable. I even found myself dying upon just booting up a game.
Since this was released in the PS2 era, there are no online leader boards. The developers can’t be faulted for that, of course, but it’s somewhat upsetting to play an obscure offline score-based game. You’re practically condemned to play in solitude, unless you’ve got a real-life friend willing to play and share frustration.
Overall, the interface is bizarre and inconsistent. When you try to restart mid-game, you’re taken to the high scores screen and must wait for all 10 of them to appear before you can actually choose another option to reset the game. In some games you are allowed to use either the D-Pad or left analog sick depending on your preference, but in others you only get to use one…even though the second control method serves no function at all. 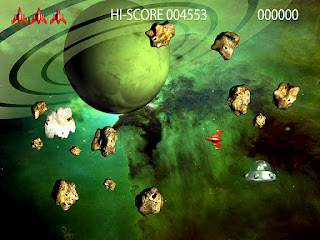 Graphically, the games ditch the resemblance to early arcade games, instead taking on a PlayStation One-like identity. They’re too advanced to be lumped in with 16-bit visuals, yet clearly fall much below the PS2’s power. Perhaps this is not an error of the developers either, but it remains mystifying to play games with the complexity of the early 1980s and visuals of the mid-1990s.
There’s not much of a soundtrack to speak of beyond the stock music on the main menu. The six games are entirely composed of various noises. What few sound effects present manage to be humorously out of context. Perhaps the developers have been enlightened about the extraterrestrial life, but I would not expect a dying alien soldier to squeak like a cute dog toy. I’m still baffled as to what motif they were going for with this whole arcade theme.
At the time of its release, Arcade Classics was a new game masquerading as a compilation of classics. It’s destined to become retro itself now that the game is included with other PS2 Classics, but that won’t change its quality for the better. I cannot justify telling you to spend €4.99 on six buggy, half-hearted shooters when the PlayStation Store houses legitimate classics as far as the eye can see.
-Clark A

Xbox Live Wakes up this week