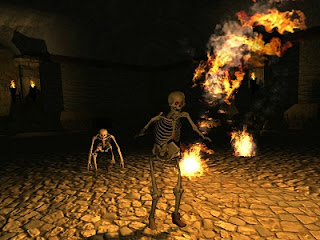 Here’s a new title we’re getting rather excited about. Tomes of Mephistopheles looks like it’s bringing back the dungeon delve experience that the King’s Field series did so well.

The game isn’t even in alpha yet, but the developer, Kot-In-Action, has some exciting tidbits of information in the changelog it published to its website:

Dungeons:
+ walls now randomly spawn with pre-structural damage up two levels of damage
+ the dungeon starting room is no longer either of the 2 large open areas
+ updated tile saving format to use tokens to allow backwards compatibility
+ added the ability to read objects from tiles such as chests, and moved doors to the new object format to allow more detailed info to be saved

Graphics:
+ added damage particle effects for skeletons (instead of blood)
+ player blood now draws in his/her view according to location hit
+ refined most of the effects in general
+ light brightness (color intensity) now fades in and out based on distance when near cull range

AI:
+ added skeletons and tweaked ai to work with their intended behavior
+ ai now plays death and pain anims
+ ai now dodge spells and also dodges when a player is charging or releasing a spell and aiming their crosshairs at that ai
+ ai now judge combat ranges more accurately
+ ai now backs up if it is too close to hit you 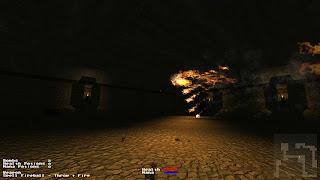 Items:
+ added items, bombs, health potions, mana potions
+ 1 uses a health potion, 2 uses a mana potion
+ player now initially spawns with 5 bombs (and they are now depleted when used)
+ player retains inventory on death (as represents final gameplay)
+ players can pick up items by running over them or using interact on them (for hard to reach places)

Main Menu:
+ main menu now functions for alpha release
+ music now begins playing when the menu opens, the game starts, or the player leaves a game and returns to the menu
+ added credits to menu when not in a dungeon 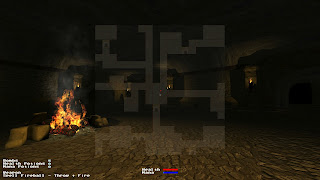 Gameplay:
+ added spells. Spells consist of combinations of runes including delivery systems, element combinations, and forking effects. Casting is done by charging a spell’s intensity, so spells can be cast either rapid fire with less effect or they can be charged for a greater effect. The player currently starts with a few different rune combinations to to use while the spell building system is still in progress. These include variations of 4 types of delivery systems: Throw, Fly, Guide, and Direct. Thrown spells are, thrown, obviously, Fly spells fly straight forward, Guide spells can be controlled as they fly by the caster, and Direct spells appear at point blank range and shotgun the target (fun with rapid fire).
+ players now have mana
+ health and mana regenerate at a slow pace (mana won’t regenerate while charging a spell)
+ m now toggles map by default
+ increased player’s view offset
+ players now react to hits with toss velocity and view punch angle changes
+ player’s pain chance is 50%, when player experiences pain his punch angle change is doubled
+ player and ai are only tossed when “experiencing pain” or dying
+ when a player or ai dies it’s toss velocity is doubled
+ damage traces now use a box instead of a line
+ decreased ai health to be consistent with player health, while decreasing player damage overall and increasing force of weapon impacts to keep a good balance between player and ai health and damage effects and pve vs pvp combat 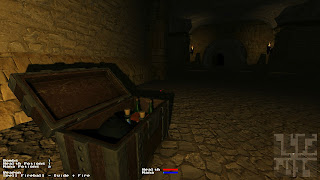 + improved damage effects such as view roll and tossing to have specific values for taking structural damage and physical damage
+ damage effects now ramp based on max health and current health. the higher your max health the less attacks will toss you around and knock your view to the side, the less current health you have compared to max health, the more intense view knocking effects will become
+ ai and other objects no longer take physical damage as long as they have structural health
+ added a red fade to the player’s screen on death
+ ai, players, and other appropriate objects now gib when their health reaches -25%
+ corpses are gibbable
+ increased overall performance

It’s a game we’re going to keep a very close eye on, to be sure.