With each installment of the Zelda games, there has been something magical about stepping into the green tunic as the Hero of Hyrule. The Legend of Zelda: The Minish Cap is no different and this handheld still offers one of the best experiences in the Zelda series.

Your adventure begins after Zelda is encased in stone by Vaati, the main antagonist in the game. It’s Links objective to restore the broken Picori Sword by gathering various elemental artifacts and defeat Vaati, removing Princess Zelda from her stone prison.

If you have played one of the previous Game Boy Zelda games you will feel right at home. The world is divided up into sections with various branches leading off to different areas or secrets. Most secrets you are unable to access at the start of the game, but once you collect certain items they will open up to you.

Unlike previous Zelda games, Link is now able to shrink down to the size of the Picori, a race of tiny creatures thanks to his companion, Ezlo. You come across Ezlo quickly in the game as he takes the form of your headpiece. The ability to shrink allows for a number of interesting puzzles throughough the game, and it’s fun to experience the world at a different scale; as the shallowest of puddles to the larger Link become large lakes that are dangerous to anyone the size of the Picori. 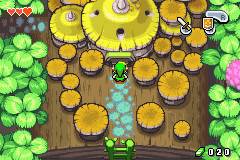 It has to be said that this game looks stunning, especially when Link has shrunk down in size. All of the environments, in classic Nintendo style are amazing to look at. There are also certain areas that are only accessible as shrunk Link. Seeing the world of Hyrule from such a small viewpoint is amazing, as the game does a great job of making you feel immersed in the small area you’re traveling in. The animation of both enemies and allies is superb. The music in classic Zelda fashion is also great to listen to.

The dungeons, a Zelda staple, are quite the norm. With a number of locked doors, and loads of enemies, you are required to solve various puzzles whilst on your way to fighting the boss. Every dungeon has an item inside for Link to use in his quest to save the princess. Each item is required to progress further into the dungeon and is essential to defeat the boss that lurks inside.

There is great diversity to the items you gather throughout your adventure. The new Zelda items include; the gust jar which is able to suck up items and blow them out and the Mole Mitts, that allow you to dig through blockades. Among the new, Zelda classics like the Bow and Arrow and Bombs also fill your inventory. With a large amount of items, latter brain-scratching puzzles work well to incorporate nearly all of them.

Another great addition to The Minish Cap derives from the previous Zelda game Four Swords. Link is able to create clones through glowing tiles on the floor. They stay in the same formation in which they were activated in, but mirror your attacks and are further added onto the already difficult puzzles.

The only real downside to the large amount of items you gather is the management system. You can assign your entire inventory to just two buttons, A and B. The Game Boy Advance’s limited number of buttons caused this problem, but nevertheless it can be annoying to constantly switch to the menu to switch items. 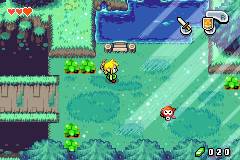 Much like any other Zelda game, there are lots of collectables that need to be found in order to complete various side-missions. Throughout the game Link will be able to fuse Kinstones with various inhabitants of Hyrule. If the fuse is successful Link will be rewarded. The more rare the Kinstone is the greater the reward will be.

After beating the game the first time I loved it. I played the game from start to finish again straight afterwards and I loved it again. It is definitely one of the best Zelda games and is by far one of the best games available on the Game Boy Advance. If this ever becomes available for purchase by non-ambassadors, buy this game.