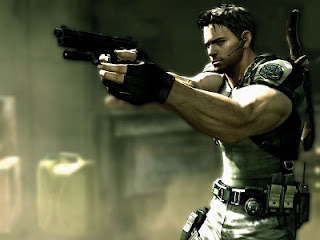 With Resident Evil 6 now formally announced, I felt it was high time to have a look back at Resident Evil 5, a game that is now downloadable (and quite cheaply, too). So, while the game was undoubtedly popular, how has it held up over time?

Frankly, for a game that is nominally from a horror series, not so well. It looks great and plays well, but without the slightest hint of those horror roots, it’s a game that lacks soul, and is ultimately a very forgettable title.

The game kicks off in a deep (and fictional) African town, and stars series favourite Chris Redfield, partnered up with newcomer Sheva Alomar. The two are sent on assignment to investigate a terrorist threat and track down a man named Irving. Predictably it doesn’t take long for things to go belly up. The parasite from Resident Evil 4 returns and turns the townsfolk into super speedy “zombies,” and there are hordes of them.

It’s a straight out action game, and owes far too much to the FPS formula for its own good. The game funnels players from set piece to set piece; through narrow tunnels and wider areas crammed with nasties. Then there’s a boss fight, cut scene, and the game moves onwards. 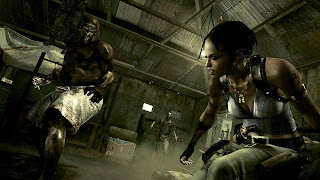 In execution though, the game plays really well. In the single player game, you’re in control of Chris, and a reasonably competent AI takes control of Sheva. Overall she’s not a massive assistance, but she also won’t put herself in too many situations where you’ll need to bail her out. Chris moves at a slow but not ponderous place, and it’s easy to be accurate with the all-important over-the-shoulder gun controls.

Those controls will be getting a workout, because as I’ve mentioned before, the hordes of enemies are large and frequent. The action set pieces are protracted firefights, and the enemies come from all directions. In a pre-Resident Evil 4 this kind of play wouldn’t be possible. Early Resident Evil characters moved so slowly that even one enemy could be a challenge. Here, five or more are a pushover.

Chris has a bunch of tools to dispose of those hordes. Guns have a nice meatiness to them, and it’s possible to carry around a lot of them. Both Chris and Sheva have nine inventory slots, with every gun, healing item and so forth taking just the one slot. 18 inventory slots is more than enough to carry some serious firepower. Throughout the game you’ll pick up gold, too, which can be used to upgrade the weapons, which adds a nice strategic element to the arsenal. 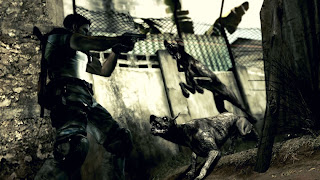 The problem is that all this isn’t Resident Evil. All it is is generic action game, and there are a lot of competent examples of those on the market now. If you ignore the superb and distinctive font that the series has used for a long time now, as well as the title screen, you’d easily forget that this is meant to be a Resident Evil game. The cheap, B-grade thrills that were the hallmark of the early games are gone. The puzzles are largely gone – this game is as linear as a modern FPSer, and the intricate “find key A to unlock door B which opens puzzle C for chest D” structure is likewise gone.

I understand why Capcom decided to take the game that way – Resident Evil 5 is a far more accessible game that more people were likely to play, enjoy, and complete. But that’s the problem; the game is “just” enjoyable. The love-or-hate, distinctive style of the early RE games, the clunky controls that were an effective way to build tension, the potential to get well and truly stuck in the game, all removed in order to make this as generically enjoyable as possible.

Heck, when there’s no need to count bullets, because enemies drop them with enough frequency to see you though the game comfortably, even on the most difficult settings, you’re never going to have a tense game. 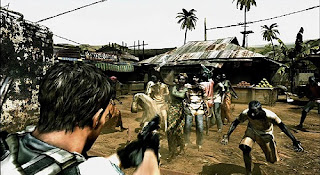 The single player game is lengthy enough, but there’s also a largely enjoyable co-op, as well as the competitive versus game modes on offer. These too do more harm than good to the spirit of Resident Evil. If you can rely on a skilled buddy to walk you through the easy bits of the game, where’s the challenge, let alone fear?

No, all that is gone. In its place is a game that is entertaining – don’t get me wrong – it’s just that being merely competent is in no way good enough for a game that should be the very text book definition of horror games. If you’re just looking for a good time or a co-op time waster, and haven’t played this yet, well, it’s cheap enough now. But if you’re looking for something remotely scary or creative, then you’re better off going with the deeply flawed, but well-intentioned Amy, also available for download on PSN.