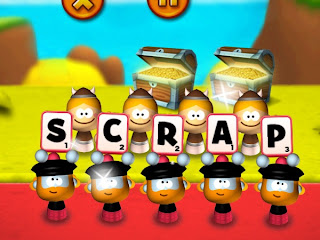 Mix Risk with Scrabble and you get Quarrel. If that doesn’t have board game fans scrambling to get to the App store, nothing will. It’s a frankly brilliant little combination that is pulled off with real style, at UTV Ignition has a real hit on its hands, I’ll wager.

The game features a variety of maps to play on. These are themed (so, volcano, forest, islands), but the theme has little impact on the gameplay. Each map is designed for two, three or four players. Once the setup is done it’s time to play. Each map is split up into a number of squares, or regions. These work a bit like territories in Risk – you have soldiers on each of your territories, and you can use those to attack any adjacent enemy territory.

The combat isn’t resolved through a simple dice roll, though. Here, you fight using words. When a battle is joined, the screen shifts to provide you with eight Scrabble-style letters. Each letter has a points value, with the rarer letters worth more points. Rearranged these eight letters form a word (which changes with each ‘battle’), which naturally provides maximum points. The goal is to spell a word worth more points than the opponent, which will give you a victory in the battle, and allow you to conquer the opposing territory (or defend your territory, if you’ve been attacked). 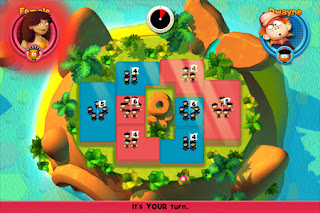 There’s a catch, though. You can only use as many letters as you have soldiers in the territory. Soldiers can only hold one letter each. Therefore you’re at a great advantage if you take eight soldiers into battle and can form full words, and your opponent only has three or four.

The goal of each game is to capture all the territories, and the maps are small enough that each game can be over in about 20 minutes. By removing the element of chance from the game, losing is less frustrating in Quarrel than Risk, and merely an incentive to keep trying.

The presentation helps, too. Colours are bright and vibrant, characters are cute without being sickly. The music is catchy. This is a bright, airy game that makes it easy to get involved in the game. With extensive play options, such as a daily challenge and multiplayer, there’s enough to keep you coming back for more, too.

The game can also be fiendishly competitive. At the end of each game the statistics includes “Word IQ.” Naturally, getting a good Word IQ is a point of pride amongst friends. Of course, how much you get out of word games depends on how much you pride yourself on being a wordsmith, but if you liked Scrabble, here’s a brilliant little game for you.

This weekend I rediscovered my Game Boy Color; it is awesome