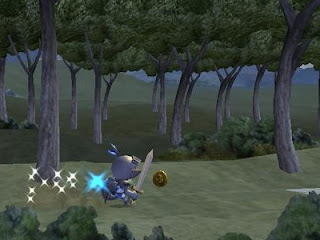 I just came by this game by chance browsing through the market and decided to give it a go. Games that debut on Android are few and far between and especially notable when they are as good as this one. Adding to the game’s uniqueness is the business model that Robot Invader, the games developer, chose for Wind-up Knight.

Freemium is a buzz-word that is usually associated with this type of game but what makes this one stand out is the fact that you can play the whole game through without paying a dime. The catch is that to advance beyond the first book you need to S-rank each and every level in book one and that’s no easy feat. The game is extremely hard to master.

Wind-Up Knight is a perpetual motion platformer in the vein of Canabalt except that you have a lot more to do than just jump, eventually. Meaning that your character keeps running and you have to react to everything that may get in his path. The progression through the first book serves as an ingenious tutorial for the game that slowly adds the in a new button that allows you to slash, roll or put your shield. You literally start the game with only one button – jump.

This system serves incredibly well to get you accustomed to the steep difficulty curve. Most levels are not frustratingly difficult if your only goal is to finish. If you’re after that S-rank, it’s a whole different ballgame. Clear state of mind and split second reflexes is what you need along with the ability to memorize the harder levels and the timing that goes with them. 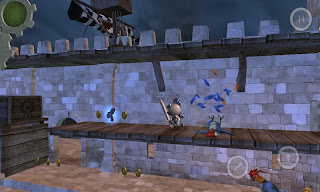 Wind-up Knight is an example where virtual buttons work. I usually get frustrated by them but here they just work. Possibly, the fact that you don’t need to control directions or acceleration/deceleration at all contributes to me liking the virtual buttons but they are also well implemented. Controls can make or break platformers of this kind and in Wind-up Knight they just get the job done.

The game looks like a top notch mobile game should and the whole design is just delightful and cute. This is a game worth dropping a few dollars for and a fine addition to the ever-growing selection on the Android Market.