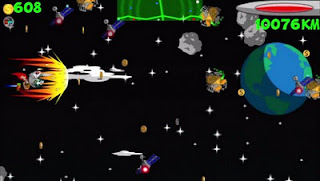 I had absolutely no idea what to expect when I fired up Orbit by Laughing Jackal. The main screen presents you with a few items like starting a new game or viewing your in-game achievements. When you begin, you have a couple of scientists who talk about the need to gather resources from planets to help fund their further studies. It’s all silly, lighthearted stuff that provides more storyline filler than the majority of the PlayStation Mini games I have played so far.

When the game begins, it appears very simple. Your character is propelled off of a launch pad and into the planet’s atmosphere (each planet serves as a different level for the game, providing you with a fair bit of visual variety if not new game mechanics) as you attempt to collect coins, blueprints and relics before landing. It sort of reminds me of Angry Birds mixed with the old flash game Pingu Throw. To beat a planet, you need to exceed a certain distance.

That distance is impossible to reach right away. However, this is the game’s primary and most effective draw – every launch you earn more currency from what you collect and how far you got on your last attempt. This currency can then be applied to different things like improving the launcher you use, to boosts and fuel. 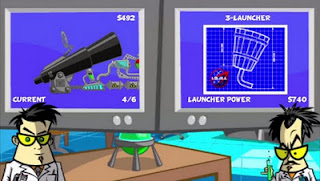 All of these small items play a factor in how far you go, because unlike Pingu you have some control over your launched character. You press the X button to give yourself a quick boost, using your limited fuel supply but gaining altitude. However, there are plenty of items in the planetary orbit that can mess you up. Creatures may ‘splatter’ your screen, obscuring your vision. There are pieces of debris that can cause you to decelerate or sacrifice fuel. So while you attempt to gather supplies and span the greatest distance possible, these obstacles can derail your efforts very quickly if you are not careful.

Each launch is a matter of a couple of minutes and navigating through the upgrade menu between launch attempts is quick and easy, even if the value of the upgrades is not always immediately evident until you see them in action. Still, the formula is addictive and comes in perfectly sized pieces. It is not terribly deep in terms of gameplay mechanics – you literally press the X button to select your launch power and press and release the same button while in flight to help guide your scientist. That is it. It’s simple, and approachable, but it does get a bit repetitive if you play in long chunks of time. 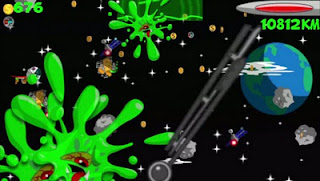 My youngest played the game for about 45 minutes, and then just up and said she was bored. Then again, she played it for 30 minutes the next day. And the next day. And almost an hour the day after that. She beat all of the worlds relatively quickly, but she went back to play earlier ones so she could better her scores.

Each time you unlock a new planet, you start over from an upgrade standpoint, which is just fine and helps the game keep its appeal. Each world gets a refreshing new look to both it, and how your character is launched, which is an added bonus. The visuals are clean and colorful, and the music and sound effects are pleasant as well.

If you are interested in trajectory-based games that have low learning curves, then this game will probably appeal to you. It is designed to be played in smaller chunks, but has an addictive quality to the upgrade system that keeps the title perfectly paced and was enjoyed by me as well as my daughter.

Nick H maintains his own great blog, Chalgyr’s game room. Click here to check it out!
Share this

Ranking the Call of Duty Games