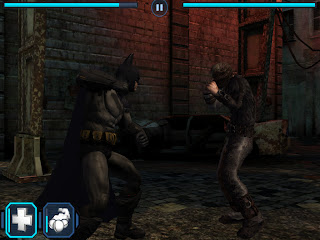 Batman. Simply saying his name aloud makes villains and super-villains the world over quake in their boots. Batman Arkham City Lockdown is loosely based of the console version, named Batman Arkham City. Following the events of Batman Arkham Asylum, Joker, Penguin, Two-Face and an assortment of infamous super-villains have been moved from the high security facility of Arkham, and inhabit the slum streets of Gotham City.

Sadly, there is no stealth orientated gameplay in Lockdown, as it is all action, similar to the gameplay in the Infinity Blades games. The controls are very simple. Left, right and up strokes register as hits, and you can chain them together to form a combo. Tapping the screen when your enemy attack will allow you to dodge, while swiping down will block, stunning your opponent and leaving him vulnerable for attack.

The combat in itself is very simplistic, and quite boring. After every fight and mission, you are given experience points which contribute towards your overall level. Points that you earn from a fight are simply from completing it, however the points earned from the entire mission takes into account your skill, the amount of attacks you dodged, and gadgets used. This may encourage you to be a bit more careful in the way you approach your battles, but I found the hack and slash method works just as well. 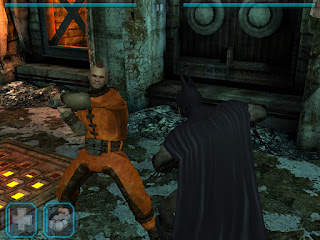 Every time you level up you earn ‘WayneTech Points’ which can be used to upgrade your Batsuit. Your strength, HP and speed are all able to be upgraded. Your are able to buy new suits from the App Store, but the perks are nothing that you cannot get in the game. At the start, your only gadget is a health pack, which restores a portion of your HP. Among gauntlets, smoke bombs and bats, you are able to update these gadgets using your WayneTech points.

Arkham City is divided up into sections, each governed by a super-villain. The game progresses through missions, and after a certain amount of missions in each section, you will be able to fight off against the boss. The premise to the missions didn’t feel like I was playing as Batman. He would simply run up to an enemy, and engage in a standoff until someone threw the first punch. Not to mention the awkward progression, where Batman would run in a wide arch around a corner, I didn’t feel as if I was playing as the Dark Knight, but merely some fighting game with a Batman skin.

The bosses attempt to be a little creative by adding a new gameplay mechanic. Your first fight against Two-Face sees you controlling a Batarang with the devices tilt system. The boss fights themselves are like the missions, where a number of goons stand in your way before you can fight the super-villain. 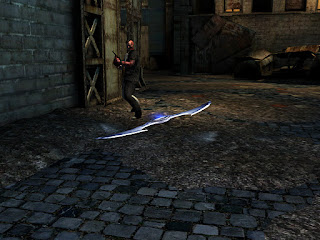 The Unreal engine does an amazing job here. The game looks superb and successfully recreates the feel of the console version. The music is also taken from the console and works well. With only four different areas, though, the engine isn’t being used to it’s full potential.

To my surprise, the game also includes comics based on the events that occurred between Arkham Asylum and Arkham City, and are really nice addition, especially to fans of the series. The tutorial at the start of the game introduced Lockdown as a prologue to Arkham City, yet I suddenly found myself inside the complex, with no real reason as to why I’m beating up thugs, and running around the street yelling “I’m Batman!” doesn’t work that well.

At the end of the day, Batman fans will love this. The purchase is worth it, solely for the comics alone. However, those who aren’t fans will probably have a better time somewhere else, and the asking price is a bit steep for to the boring repetitive combat.