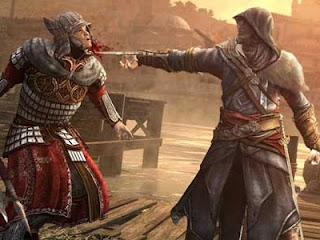 Assassin’s Creed Revelations is a terrible, broken game. Not in terms of its technical production values – it looks and sounds the part of a blockbuster video game, but if Michael Bay over in the film industry has taught us anything, these blockbuster looks do not guarantee a quality experience.

In fact, I’m doing Michael Bay a disservice in bringing him into this conversation. The man is a horrible human being for ruining some movies that had real potential, but Revelations is in a whole other league. What kicked of as a fresh franchise with real potential, Assassin’s Creed has been ripped to shreds in the pursuit of yearly releases and throwing too many crap ideas into the mix.

The game is broken right down to its concept. For the few who haven’t played an Assassin’s Creed game before, it works like this: modern man is able to inhabit the memories of his ancestors, and the game is about reliving those genetic memories. In other words – you’re playing a dream. In the first game, this was a reasonably intriguing premise and the gameplay flaws that came with it were reasonably forgivable. We all more-or-less expected Ubisoft’s developers to get a handle on it later on. Only, despite having six (!) developers working on this year’s project, Revelations still suffers, rather than benefits from, the game-within-memory gimmick. 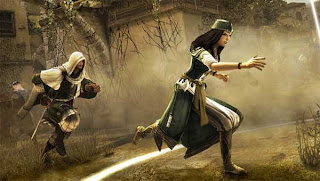 It’s used as a crutch to prevent players from breaking some rather strict rules within what is meant to be an open world. The threat of being “desynchronized” (the in-game term for having the player’s link between the modern person and his ancestor’s memories – ie. In-game death) hangs over players’ heads like the Sword of Damocles. Don’t do what the game likes, and you’re punished. Despite being an assassin, you’re not allowed to kill normal people – if you do, you can be desynchronized. You can rob them to your heart’s content with very few ramifications, so this no kill policy is not really about the lead character, Ezio, having morals, it’s simply because killing random people is disruptive to the big action set pieces the game wants to focus on.

You’re not allowed to get too far away from targets in many missions either, crippling the freedom you’re meant to enjoy in open world games. Fail to do what the game wants you to do, and you can be desynchronized. Between missions of course, you’re free to roam this city at will, but there’s very little interactivity there; like mannequins the cityfolk wander about aimlessly, and aside from robbing them, there’s very little you can do with them. As a result, between missions you’re just following the minimap to the next objective icon, with very, very little reason to take in the exotic locales the game is set within. 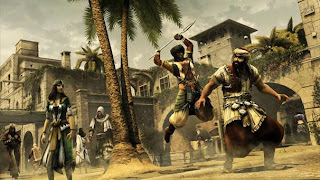 Occasionally you’ll be able to embark on sidequests, but this just uncovers a hodgepodge of disparate game ideas, none of which work that well. From a management game that is far too simple, to one of the worst examples of tower defence I’ve ever seen before, Assassin’s Creed Revelations insists on hurling at you ideas that have no place in this game. At all.

It’s a stark contrast to a similarly-themed game that works; Yakuza 4. There, the open world is filled with stuff to do, but it all makes sense in the context that the game is placed in a Japanese city. In that game it’s fun to wander about and explore. With Revelations the “stuff to do” is there because the developers took a guess that’s what people would buy. It’s cynical, it breaks with the game’s setting, and in the end makes for an environment that fails to be interesting on any level.

Things only get worse in the actual missions. So obsessed was Ubisoft with providing a grand adventure that they’ve filled Revelations with every B-grade action movie moment from the 80s. The first 20 minutes of the game sets the experience up brilliantly, having Ezio perform the Assassin’s Creed staple of leaping from sky-high buildings, to paragliding down a mountain, being dragged along the ground by a stagecoach hanging on to a rope, and of course, the assassinations out of bails of hay. It’s all very James Bond, but lacks any of the charm or humour that the Bond movies got away with. 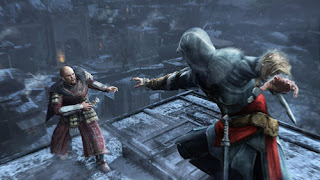 The AI is terrible in that it’s so mechanical you can see the game crunching numbers in the background. If you duck into a hiding place, unless you did so with the enemy soldiers standing right on top of you, you’ll be fine, and if they were chasing you, they’ll completely forget about you in a literal heartbeat. Combat is barely improved from the original game, and it wasn’t exactly a highlight there.

Multiplayer, a relatively new part of the Assassin’s Creed creed, is as tacked on and ultimately pointless as it was in the last game. If you’re going to do multiplayer, either do it right, or don’t do it at all. I would argue that Assassin’s Creed never needed multiplayer, but then it didn’t need a yearly release cycle, either.

The one interesting part of the game remains thankfully in tact as a saving grace – the free running. Leaping across rooftops, finding stealthy ways to reach marks and scrambling up walls is as compelling now as it was back when Ubisoft first realised this was fun – the PS2 classic Prince of Persia Sands of Time. The entire Assassin’s Creed series would be better serviced taking the linear approach and focusing on what works, rather than this pretence of an open world.

So all in all, you’re getting plastic, dull environments, a plot that forces players in an open world to follow a restrictive playbook and weak minigamesUbisoft needs to give the series a few year’s rest now and drastically rethink how it approaches this franchise, because as impressive as it is that they’ve managed to ruin such a great premise, it’s also one of the great tragedies of the generation.