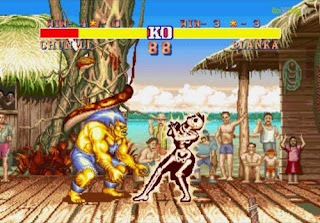 It’s somewhat rare to see a Virtual Console game receive any major changes from the original release, but finding additional features is even more scarce. Fighting fans should rejoice, though, for Street Fighter II will be hitting the Virtual Console once again, with online play.

While only a Japanese version was confirmed earlier this week, the Capcom Unity website revealed that we’ll be seeing the game in other regions too:

Here’s a nice surprise – the Sega Genesis / Mega Drive version of Super Street Fighter II: The New Challengers is coming to the Japanese Virtual Console with online play added. On the surface, that’s not entirely great news, as most of us are not in Japan. However, I can confirm that this is indeed coming soon for US / EU as well, though there’s no set date.

PlayStation Network and Xbox Live Arcade both offer high-definition versions of the game with online play, but it looks like Nintendo’s console will instead see the original game enhanced. There’s something to be said for authenticity.