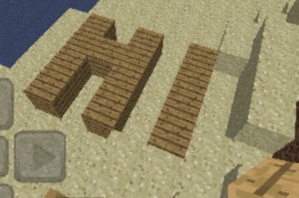 Anyone who plays games should know what Minecraft is by now. Even if you haven’t played the game, the distinctive art style should be instantly recognizable, and the core concept behind the game – build stuff – should be common knowledge.

And now that core concept is on the iPad.

To make something clear from the outset – Minecraft: Pocket Edition is most definitely not Minecraft. It merely takes the building part of Minecraft, and waters it down to the barest bones possible. And yet, despite being so limited and so utterly pointless, Pocket Edition is a really addictive experience, and the perfect game to have sitting on the iPhone or iPad.
It was refreshing that when I booted the game up for the first time, there were no tutorials and no introduction: just a pixelated menu screen inviting me to make my first world. I did so, and was immediately dropped in an expansive world of pixelated blocks and left to my own devices.

After wandering around aimlessly for a few moments I was comfortable with the virtual controls (just a D-pad and a jump button, with a tap building whatever object I have selected, and a tap-and-hold to destroy blocks). It was time to build something. As my first outing with Minecraft, ever (yes, I am one of those that hadn’t had the fortune to play the game previously), I decided I would start simple – by building a house. Methodically I went about my task, and soon had a small brick structure with a comfortable little bed, some torches, and even a little basement with a low table.

And that’s about the extent of this game. There’s no enemies to fend off, and certainly no TNT. There’s only a handful of blocks, though it’s enough to achieve a startling range of buildings and designs. Far from a criticism, the building in this game has an astounding methodical addictiveness about it, and finishing up with a completed structure, whether a simple hut or a massive construction, is enormously rewarding.
Because the game is so simple, it’s easy to boot it up for five minute building busts when you’re working on a more complex project. That’s why it’s called “pocket edition,” see – it’s for people who love Minecraft on the go.
There’s multiplayer too, allowing people to build and destroy the same world together. Working together to come up with something spectacular is quite possibly the best iOS multiplayer experience out there.
There’s also the previous history of Notch and Mojang to consider. Minecraft itself is constantly being added to and refined, and there’s no reason to suspect the Pocket Edition will be any different. No doubt down the track this will become a far richer experience down the track.
Now, if you’ll excuse me, I’m going to dig a series of caves into that nearby mountain.