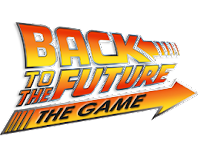 The videogame history of the Back to the Future franchise has been… spotty. No, on second thought, make that bad to non-existent. And that’s probably being too kind-

Personally, I was always waiting for a BttF Trilogy title. You know, something like the Super Star Wars games or the Indiana Jones Trilogy cart that was released way back on the SNES… that kind of thing.

But, it was not to be and the franchise has pretty much languished in the pits of nothingness for years and years. Until developer Telltale Games came along that is. Telltale brought the adventures of Doc and Marty into the modern age with a brand new fourth entry in the series that used the classic point and click style of adventure gaming.

Always a favorite of mine, the classic graphic adventure is truly one of the finest methods of storytelling that the world of interactive gaming can produce. BttF? Yeah, it carries on that tradition.

If you haven’ played any of the formerly episodic… uh… episodes… yet, I’ll fill you in. The game was originally released online only and, as a good chunk of Telltale’s games are, as a kind of ‘season’ broken up into episodes. What we’re looking at here in this review is the new collected edition of the game that was just released on the PS3 (and PC). There’s a good side and a bad side to this collection, whether you buy at retail, or download the episodes – so we’ll start with the ‘good’. And that, my friends, is that this is the same game that was released episodically. The bottom line is that Back to the Future is an excellent example of a modern adventure title.

What Telltale really does, for the most part, is take the tried and true graphic adventure mechanics from the hey-day of the genre and slap a modern coat of paint on it. You’ll spend your game time walking (or running- more on that later) around Hill Valley throughout different eras and timelines as Marty McFly. You’ll also be clicking on people and items using a well designed highlighting feature that’s mapped to the right stick. It works well and fills in nicely for the more traditional mouse control. That’s about it for the gameplay, but it’s really all that’s necessary in a game like this. If it ain’t broke…

The graphics are pretty solid, if unspectacular, with just a few little issues that pop up from time to time. Stuff like characters stuttering or freezing for a second as a new line loads up won’t break the experience for you, but it is noticeable. It seems to be something that Telltale needs to start addressing too, since this is maybe the third time I’ve had the issue pop up in it’s games.

Audio is really where this one shines though. If hearing AJ LoCascio do a dead on Marty, or Chris Lloyd return as Doc Brown doesn’t send a tingle up your spine- then I can’t help you. In that same vein, the musical score is a real treat and is as good as ever with the original tunes surging up at all the right moments.

But it’s not all good news here. The control for walking/running has some very unfortunate issues. I had actually played a few of the individual episodes on the PC, and while I had no problems there, the PS3 is another story.

The running is a tad sketch in general (which I could live with) but the standard walking controls don’t really get along with the camera angles most of the time. As the camera switches to a new perspective, it’s not unusual to find yourself heading a different direction than you intended. And I might as well mention that that running seems to stop all together most of the time when you cross into a new part of a level. The animation stays ‘on’ but Marty moves as slow as his standard walk. You have to actually stop all together and start up your jog again. Annoying.

Lets be honest though, you know there’s not all that much to complain about with a game if I’m picking on extras of all things. At its core, Back to the Future: The Game is yet another entry in Telltale’s lineup of excellent modern graphic adventures and should not be missed by fans of either the IP or the genre. If you haven’t played the episodes separately, or you’ve only played through one or two, don’t question if this is worth your time- it is.