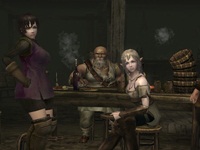 Fingers crossed, folks. Gamepot, the publishers behind Wizardry Online, is looking to bring the game to a global audience. It just needs to find a publisher partner.

For those who don’t know (shame on you!) Wizardry is a long-running, mind-blowing hardcore RPG series, famed for its incredible difficulty and dungeon hacking hijinks.

In other words, back in the day, it was the closest approximation of the Dungeons & Dragons that computer gamers had. It’s a series that has dropped off in popularity in the west, but has maintained a strong audience in Japan.

Gamepot is hoping to have an English version available in early 2012. The game went down well in Japan, with 100,000 signups in the first day of testing.

As an MMO, Wizardry Online has some awesome, if a bit frighting, concepts. If we copy the press release blurb into here for you:

“Developed in conjunction with Japanese game studio Headlock Inc., Wizardry Online offers multiplayer features new to the Wizardry series, including party play and player versus player (PvP) combat, while maintaining the classic style for which the series is beloved. Hardcore gamers will revel in the return of the complex dungeons that punctuated earlier iterations, and soon will find that the game is fraught with significant peril: Wizardry Online features permanent death, in which player characters can be removed from the game upon dying, creating a more immersive experience.”

Permanent death. Think on that for a moment.