As I play though Dark Souls (EDIT: Read the review at Otaku Gaming), I’ve come to realise something; as Dark Souls is the sequel in all-but-name to Demon’s Souls, I really, really hope that From Software doesn’t feel the need to make another ‘spiritual’ sequel.

Let me explain, because I’m in no way criticising what is one of the greatest games on the PS3. I’m one of the relative few who can claim to be a fan of Demon’s Souls before Demon’s Souls was even announced. Before that game there was a series of four RPGs that Demon’s Souls is itself a ‘spirital’ sequel to; The King’s Field games. King’s Field IV, especially, is just like a PS2 Demon’s Souls, only played out in the first person. Like the two Souls games, King’s Field games were brutally difficult, but featured amazing imagination, setting, music and a special call out to the level design; King’s Field IV has the best catacombs in a game, ever. 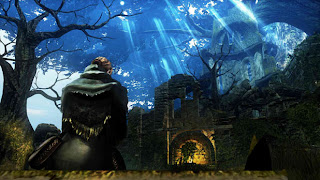 I remember seeing the first set of screenshots and the announcement Demon’s Souls, well before the game was released to become a cult classic. I was excited, and I was even more excited when I finally got to play the game as it was a perfect reimagining of the King’s Field formula for the modern console; the atmosphere, the levels and the monsters all fit perfectly with the games I have memorised, while the hub world, the clever online system and the shift to third person (and substantially quicker play pace) reinvented the formula to be far more attractive to the modern gamer.

And then Dark Souls was announced, and it was to be harder and bigger than its ‘spiritual’ predecessor. But here’s the ultimate rub; it’s more of the same in practice. The game isn’t actually harder than Demon’s Souls if you’ve played that game, because it’s throwing much of the same difficulty at you. I still haven’t finished Dark Souls, but so far there’s been a very rare moment where I haven’t anticipated a challenge, or a boss has truly confused me. It is very much Demon’s Souls 2. 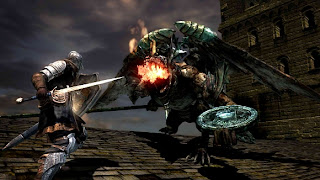 And there are signs of compromises being made in a bid to make this game more attractive to a broad audience. First sign? There’s sunlight in this game. King’s Field games and Demon’s Souls were uncompromisingly bleak, as befits a series of games that focus on loneliness, Gothic horror, and decrepit catacombs and ruined wastelands. Dark Souls by contrast has plenty of moments where it’s like that, but it also features bright sunlight bouncing off ruins and some surprisingly bright greenery.

It’s a relative scale of course; this isn’t a Dragon Quest game, but as I said, it’s a sign that From Software is softening up somewhat; Dark Souls has glimmers of hope amongst the grim vision.

It is for this exact reason I hope this is the last “Souls” game. From Software shouldn’t compromise its vision further, and it’s a pony that’s running out of tricks anyway. A third game will start to dilute that brilliant vision that From Software has, and given the success that the first two games, the sales targets given to From would require a dilution to gun for mass market acceptance.

No, go out on a high, From Software. If you feel the need to come back to this style of game, go back to the uncompromising brutality, and make King’s Field V.