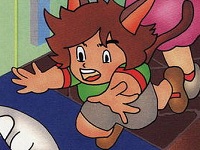 Think of great Game Boy games, and you’re not likely to be thinking of Catrap. It’s not a classic puzzler but it is well worth the download, especially at the bargain (by eShop standards) asking price.

The premise is fairly weird and never properly explained. There are two kids dressed up with cat ears. There’s a bunch of enemies across 100 levels. The goal is to eliminate the enemies in each level. To do this the cat-children will need to push blocks around, dig through soft ground, climb ladders and in some select levels work as a duo to accomplish this mission.

Folks who are fans of Wayforward’s now-classic DSiWare adventure Mighty Flip Champs might be used to the restricted abilities of the characters themselves. These two cat-children can’t jump, they can’t move quickly and they can’t pull blocks, only push them. Within their limited abilities you need to work through the levels, they’re only complete when the last enemy is destroyed.

Though the game doesn’t need especially precise controls, it’s worth noting that character movement is a little clunky and way too slow by modern standards. The latter makes sense from a design perspective as it means that you won’t be making accidental movements that ruin your strategy to finish the level, but it’s not going to gel so well with the more modern gamer’s demands for fast, fluid movement.

The first 20 or so levels are an utter cakewalk and serve admirably as an introduction to the game’s rules, as well as granting you a firm idea of different ways in which you can achieve objectives. Then the difficulty takes a substantial jump and levels require a lot of forethought before setting out, lest the little heroes find themselves trapped. Most levels only have one way in which to complete them, often you won’t realise you’ve taken some wrong steps until you’re much further on. Luckily the game offers a rewind feature (the first example of it in videogame history), which allows you to reverse everything right back to the start of the level if you’d like. Alternatively there’s the restart commend if you find yourself really confused and need a fresh look at it.

The game doesn’t offer many incentives to replay levels. Though it does keep track of time as you’re playing a level, it doesn’t save fastest times, and there’s no medals or unlocks to encourage you to work to improve your skills. This is of course offset by sheer content – 100 levels is going to take some time to play through. Even better is that this game offers a full level creation option so your friends can try and come up with the most devilishly hard puzzles ever.

It’s even possible to share the levels thanks to the password generator, and a limited number of them can be saved to memory. Not as efficient or fully featured as Little Big Planet, sure but it’s enough to add value to an already fully-featured package.

If you do happen to have the game, make sure you sign up on our forums to say hi. We’re very happy to exchange level codes with you!

Of course, as a simple puzzle game, it’s hard to get too worked up about Catrip. The presentation is terrible, the music woeful and there’s nothing about this game that stands up and says “buy me.” But do it anyway, because there’s enough to the game to make you think, and it’ll last you longer than most of the other Game Boy Virtual Console games.