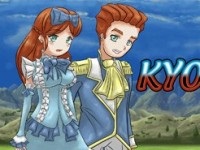 Kyotokei – Polarity Shooter is the iOS version of the Wii game released earlier this year and, for those who missed out on that one, its a continuous side-scrolling shooter that appears heavily influenced by Ikaruga (except it’s a sidescrolling shooter rather than vertical). It’s fast-paced, action-packed and a lot of fun so despite its derivative nature it plays well and will provide quite a challenge even to experienced gamers.

The background storyline (of which the game actually makes no mention of whatsoever) is that an evil witch called Rika has invaded the peaceful world of Estaria with monsters (no particular reason is given as to why, she just did). Apparently the magic wizard Kyo is the only person who can stop her which is where you come in. Take control of Kyo (who sits astride a giant bird) and blast your way through five stages across three difficulty levels to save Estaria.

There are five stages which are all aesthetically different but practically the same. Swamps, mountains and caves are just some of the environments you’ll be flying through, sometimes speeding along a plain and then shooting up into the sky to battle it out amongst the clouds. It all looks very exciting and the blur as you rush past objects serves to intensify the experience. You must fight your way through a variety of monsters too, ranging from imps to birds to sexy manga ladies and even multi-section bosses at the end of every stage. 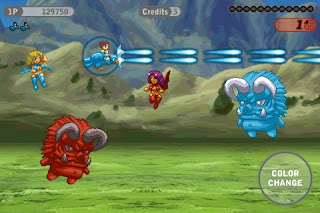 Each enemy is colour-coded either red or blue, as are the bullets they shoot at you. This is a key feature of the game as you are able to absorb the bullets of either colour (though not both at the same time). Kyo is protected by an aura forcefield and its colour can change at any time by tapping the “change colour” button and then if your bubble is blue you can absorb blue bullets, or red bullets if you turn your bubble red. Be warned though; get hit by the wrong coloured bullet or get touched by an enemy and you die instantly. On the other hand, absorb more than 10 bullets of the right colour and you’ll gain the power to shoot a homing missile!

The controls are split into “Touch” mode and “Arcade” mode. The first is a matter of placing your finger on the screen and sliding it around to move your character and this is probably the more comfortable version, though occasionally your finger can obscure the on-screen action. The “Arcade” mode relies on a virtual control pad in the bottom left corner but feels sluggish and not nearly responsive enough for the rapid-fire movement you’ll need to overcome the stages. Both modes will fire automatically as long as your finger is on the screen so there is often a lot going on all at one time; your barrage of bullets, the monsters flying around and the constant flow of enemy projectiles, all of which you’ll need to concentrate on if you want to have any hope of completing the stage.

Get more points by shooting chains of the same-coloured enemies (which is a hell of a lot harder to do than it sounds) and compare your high scores against the pre-set ones in-game or pass and play with your friends. You get three lives like in any classic arcade game but you’re also kindly provided with an extra two credits so that you can keep playing (and you will need them). Enter your three-letter name in to the high scores after the “Game Over” screen and compare your rating to the others. I played on the “Normal” difficulty setting and the highest rating I managed to get was an “E” (just to give you some perspective into how hard the game is to master). Thankfully, once you’ve reached a stage you can always come back to it rather than starting from the beginning every time.

Kyotokei – Polarity Shooter is a very challenging, rapidly flowing horizontal scrolling shoot-em-up that will require focus, practice and dedication. You will get frustrated but you will get hooked too; this game is exciting, a lot of fun and very addictive and even though there aren’t many stages, there’s a decent variety to keep you entertained and coming back for more.

10 PS3 exclusives that are tragically underrated