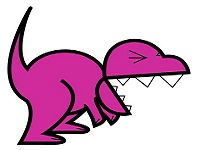 When you break it down the basic premise is to walk along a straight path and throw rocks at various objects in an attempt to get a high score. Obviously its a little more complicated than that but to be honest, that’s pretty much the crux of the game and the rest is just details.

Havoc starts out with some basic storyline that sees three dinosaurs sitting around, playing with their baby when out of nowhere a pterodactyl swoops down and kidnaps the child. Its up to you then to take control of one of the adult monsters; Lilith, Xerxes or Samson, and to make your way across five stages in an attempt to rescue your child. The five different stages have no relevance to anything and nothing substantial changes in them from a practical point of view, its simply a change of scenery. Your monster stays at the bottom centre of the screen and the stage scrolls down automatically to move your character to the end. The artwork is quite interesting; line drawings crudely coloured in which gives the game a charm and almost a childlike quality. 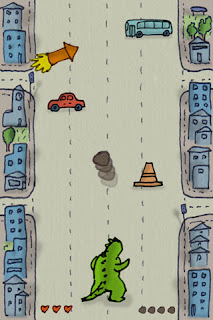 There’s nothing childlike about the difficulty of the game though. Each stage has a minimum score that you’ll have to achieve to unlock the next one and you’re judged on how well you do in each stage. Bronze, silver and gold medals are awarded for getting a score in a certain range but you’ll need an almost perfect round to get the gold. Points are awarded for destroying various stationary enemies or objects in your path by throwing rocks at them and you collect more rocks as you go along. Simply tap on a rock to add it to your arsenal.

Throwing the damn things can be a little trickier though as you must slide your finger from your character in the direction you want to throw and that isn’t always as accurate as you might like. Also, you have a limited range in which to throw your projectiles; you’ll have roughly a 30-degree angle to either side in which to launch your attacks which means that getting your trajectory right is key to success. If the enemy passes beyond your attack angles (or you run out of rocks) then you can’t kill them and they’ll take off one of your three hearts. 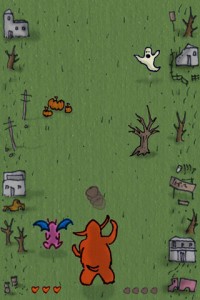 Another feature of the game is that to get the maximum number of points you’ll have to knock rockets out of the sky with your rocks. A rocket will occasionally fly by and its up to you to hit it with one of your precious projectiles (and they really are precious in the later stages). Some rockets will double or even triple the points from your next kill while one rocket will grant the power of a minion. The minion acts as another heart point and also boosts the power of your rocks. You can even get two minions which means that all your rocks are instant kills so you can conserve the number of rocks you throw. Extra rocks and minions will be added as points to your final stage score so keep them handy if you can. With Open Feint integration you can also compare your scores with those of other players which increases the playability of the game.

All in all, Havoc is a relatively simple game that’s easy to play, very difficult to master and has a cute appeal to it that will entertain both young and old. Its not ground-breaking, its not brilliant but what it does offer is a reasonably interesting game that might keep people playing until they get those high scores. The gameplay could definitely do with some adjustments such as a better grading to the difficulty settings, moving enemies, interactive stages (and more of them) and perhaps some more variation with weaponry. If you’re looking for a challenge though, you could do much worse.