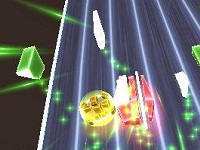 Taking metaphorical things literally deserves a great deal of points for ingenuity. Creating an entire game around such a concept deserves even more. Data Jammers: Fast Forward is a very pleasant game in theory; it’s a game whose design is at core intelligent and witty. The team from Digital Eel have built a game in the mould of F-Zero X (high speed, reactionary racing-style game) and justified it as a data jammer moving through the information ‘superhighway’.

The concept is well founded: your ‘program’ aims is to reach its goals (survival) by traversing the rough world of the superhighway. The player’s purpose is to ensure the program survives (in doing so earning points). The more points, the better. Points are generated through level progress and boosted by collecting bonus beneficial things, such as specific non-game superficial rings and support objects such a shields as well as other defensive devices carefully placed on the linear tracks.

Working counterproductively, harmful things/ highway defenders attempt to impede the player’s progress and destroy your little program, doing aggressive things that require skill to avoid as being in control of a rather fragile hero makes withstanding attacks difficult. Dodging incoming attacks is your program’s primary method of survival. To assist with the dodging, the player is armed with a very small arsenal of limited offensive weapons. Unfortunately, this addition feels as though it was a developmental afterthought, with little variety in weapons used. 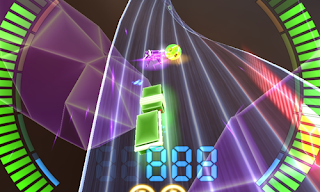 Gameplay is simple and repetitive. Learning the game is simple. Five buttons are needed: up (accelerate), down (decelerate), left, right and a fire button. Sound tough? I thought not. The difficulty is achieved solely through the game speed, which is hectic and requires some practice. For reference, it is though a game like Mario Kart had been given 10 red bulls with a further 10 cups of coffee.

In-game success is achieved through split second reactions to approaching barriers (which is not helped by a short viewing distance and no reference map) as well as avoiding darting harmful ‘enemies’. Often the game becomes an information overload with a combination of impedances and the uncontrolled, ridiculous speed. The problem is that such harsh lessons are only learned through repetition and luck.

What ensures that Data Jammers is a limited experience is the level design, which is not extensive, consisting of a mere three chapters subdivided into a small amount of stages per chapter. A lack of any form of storyline means that progression in levels is arbitrary, with little feel to its significance. Combining this with a repeated background, all levels run together. Further, moving through these chapters is not difficult. A modest player could complete the game in a mere two hours. To their credit, the developers have attempted to add further gameplay via achievements but these are also rather easy to achieve, with mere progression and dumb luck responsible for about 75 per cent of them. Indeed, completing all in game levels and achievements took me less then three hours. 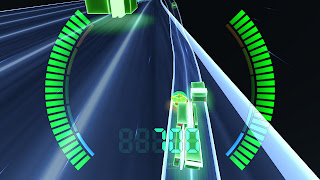 Data Jammers is not all bad. The game feel has a techno, 90’s computer sci-fi feel, that is carried nicely with enjoyably nostalgic graphics, a nice collection of sound effects and suitable but repetitive music. Controls, critical in a reaction specific game are well performed as the protagonist moves effortlessly where the player directs, with a great level of responsiveness. Enemy AI is also effective and performs to an admiral level. This is most apparent in ‘heat seeking’ style enemies whilst the biggest challenge factor is attributed to bosses. The game is also friendly on people with slow Internet speeds, with a download size of less than 100 MB.

Unfortunately, this also creates an overall feel for Data Jammers as a relic, and furthers its somewhat underwhelming nature. The game concept seems fun but silly, with its gameplay pushing the game towards the latter. In a genre that has seen its fair share of attempts previously, Data Jammers: Fast Forward’s inability to innovate is obvious. Much older games (F Zero X on the Nintendo 64 springs to mind) offer a great deal more in terms of level design, a variety in playable characters and a smoother gameplay experience.