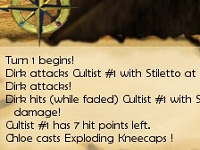 Besides the not-so-humble FPS, the RPG is the most ‘done’ genre out of all the schools of videogaming. As a result of this, we’ve all become used to the same characters, plots, villains, mechanics and twists- they’ve been used over and over again to the point of which we can spot exactly where we’re going from the opening title screen. Frayed Knights: The Skull of S’makh-Daon realises this and takes every available opportunity to poke fun at it.

Before we get to discussing the magnificently brilliant writing present here, we should first cover the premise and gameplay.

You guide the band of adventurers known as the Frayed Knights, (given the title for constantly being the worst of all heroes) and you set out to do some adventure-y things. Dungeon crawl, fight monsters, find treasure, appease your guild head and overthrow a band of intelligent rats planning world domination. The usual stuff. The group has no real goal to begin with except to be slightly competent in their chosen field of expertise. 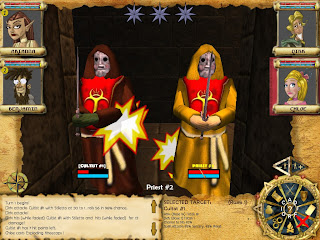 You try and accomplish these tasks in a satisfactory manner from a first person point of view, which to be honest is a little bit awkward at first. However, once you’ve taken the ten minutes to accustom yourself to this, you’ll soon find it presents no problem and you get straight into some turn based combat.

You’ll be spending a fair lot of time in front of a combat screen here, and it gets pretty challenging even early on. To help you with this, the games’ unique drawcards come in. First is a neat little thing called “drama points” and I find the concept in itself hilarious. Basically, you gain points that fill up three stars at the top of your screen whenever you do anything dramatic; anything that would be accompanied in a movie by the DRR DRR DRR sound of melodrama. This ranges from dialogue, to encounters to disarming traps – all sorts of things. These are vitally important because of the next drawcard.

The endurance bar is interesting. This bar is THE most important thing in combat, second only to health, and then, only slightly. Whenever you do an action in battle, your stamina in your endurance bar goes down. The less stamina you have, the more easily you are hurt, the less damage you deal, the more you miss. There’s also a catch. 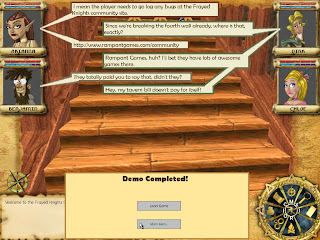 As time goes on, the maximum that your stamina your endurance bar can actually hold decreases. This WILL be your downfall. There’s no way to fix this except spending drama stars or resting at an inn. Another kicker is that drama stars do not save with your games. Saving and reloading is not encouraged.

Sounds like a game breaker, right? Hell no! As a matter of fact it adds so much more depth to the usual rinse and repeat of RPG turn based combat. This forces you to really think about when you should be resting, going back for potions, using those stars, and makes you pick your fights carefully. To this end, I offer a protip. DO NOT threaten the talking surrealist skull in the Tower of Almost Certain Death. That’s good life advice too.

Your party consists of four fixed members. Arianna, dainty warrior half elf with a short temper, Dirk, a clumsy lowbrow thief, Ben, a timid priest only very recently joined after a spell in herbalism, and a ditsy sorceress named Chloe who takes a little too much pleasure in pyromania spells. This is where the writing of this game really shines. It got to a point that even though the gameplay itself was excellent; I kept playing into the wee hours of the morning for the dialogue. So much fun is had here with not only the characters interacting in the most hilarious, fascinating and memorable ways, but with all the fun poked at RPGs I mentioned earlier. It throws a lot of curveballs around RPG convention. When asked to check out the rat problem in Farmer Brown’s basement, Dirk proclaims “not another kill the rats in the basement quest!” I actually laughed out loud. (How many games have actually made you laugh vocally? And that’s perhaps the weakest gag.) The devs took my expectations of the quest and turned it into exactly what I had not suspected, with some really good results. 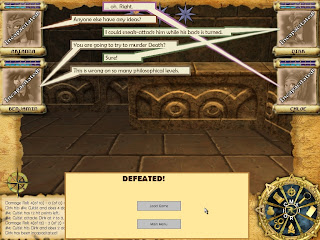 The writing is the reason every RPG fans should play it, or even RPG haters, hell, everyone! There are just so many amazing moments; like after getting killed the full five minute dialogue that takes place. I can’t find any videos and only one screenshot, so you’ll just have to buy it and find out. The game was worth it just for that.

My only real complaints are made because I have to. This ain’t a pretty game. It looks like it’s been developed during the late 90’s, the trees are by far the most hideous I’ve ever seen and the neutral NPCs do not move. At all. They’re essentially fleshy talkative statues.

The main beef I have in combat is that you only have 3 quickslots for spells and no item quickslots, so you have to heal with potions and blast with wands by going into your inventory and doing it manually. Swapping enemies can only be done prior to attacking, which is a bummer when you spend massive stamina on a powerful poison spell on the weakest enemy.

Your walking speed is about the pace of a brisk walk, which is fine for dungeons and tight corridors, but for wide open spaces such as your first town, it gets very monotonous very quickly.

Frayed Knights is produced by Rampant Games. A small collection of developers “working out of their basements”, and like all things produced below ground level, the quality here is superb in almost every aspect. Combat is new and refreshing, something desperately needed in an industry that doesn’t ever take chances, the characters are memorable, the writing is brilliant, and it just makes you come back for more. Luckily, this is the first of a trilogy, and I only hope I get to review all of them. Google the name and play this game.