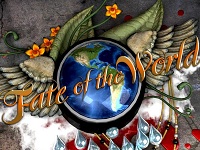 Being a long time fan of sims, I’ve played them all, everything from IL-2 Sturmnovik to Sim City; but Fate of the World is my first foray into the often ignored realm of ‘serious games’. All of these serious games intend to educate (wait! Don’t go away!) but often fail getting the full breadth and gravitas of their messages across. Fate of the World has a very obvious message, but instead of being bland and lost in translation, it’s utterly terrifying.

The game begins with you being elected the head of the GEO, the Global Environmental Organisation, and it is your job to do all that is in your power to stop, or at least hinder climate change and its effects. Not a terribly easy task, yeah? Well, you’re spot on.

You preside over the Earth, giving orders to the provinces of the globe in the form of ‘cards’, actions that the GEO takes in order to complete its objectives in stopping the gamut of C02 emissions belching from every mechanical orifice and the shitstorm all its terrible effects. Your job isn’t just to stop harmful emissions, your task is also to improve the quality of life for the global population, find and research sustainable alternatives, deaden the effects of rising sea levels and unpredictable weather, educate the populace of your mission, avert economic crisis, war, nuclear proliferation, as well as remain in office.

The game does not have a campaign mode, but rather a set of scenarios in which you must achieve the win conditions, avoid the lose conditions and pick up as many bonus objectives and achievements as possible. It’s very hard for me to simplify this game to write about because it is NOT a simple game. And it is hard. Very hard. 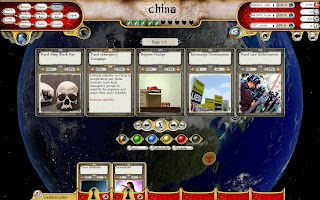 The difficultly lies within the fact that you must have a rudimentary knowledge of science, economics and psychology to some extent; every action you have has a direct consequence on another part of the nations you are guiding and administering. I’m hardly exaggerating. The game is essentially a real world simulation, and the coders have done a very good job at emulating it, so the difficulty is in line with the game’s message. If it were easy most people would turn off to the serious point this game is making.

More troubles also come from the fact is that there is no chopping and changing with your actions each turn. You must commit early on to a solution to the provinces’ and the worlds’ problems and the situation WILL change to make your decision far less effective. The key is to choose the one that will suck the least.

When you do screw up, it will be entirely your fault, but the good thing is that you don’t feel robbed of it, or that the game is simply being unfair; every action that turns out to be a bad one is met with a rousing chorus of “dammit! I should have gone for X!” Rather than “you bastard game!” and you do learn from it. Trial and error is an important part of the game, as well as a highly recommended reading of the wiki.

However, one bone I will pick here is that some of the cards you deploy do absolutely nothing. Even the wiki backs me up on this when it says that certain cards have absolutely no effect. This I imagine is the pre-planning process for future updates, but even so the loose ends here are frustrating, misleading and ultimately bad form. It’s a really rookie mistake for the developers to make.

Also. The game requires you to look at data screens to see what exactly is going on and how to fix it, and for a function so very important, it is frustratingly hard to navigate and is hardly intuitive. This is the big failing point for me. If the information was presented in a form other than a slow-acting button that brings up screens full of other slow acting buttons and graphs that are bitches to get to, it would improve the game exponentially. 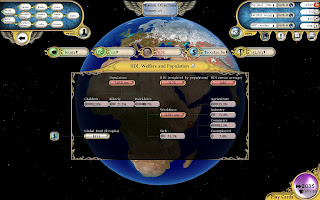 I will take the time now to talk about the message of Fate of the World a bit more, and I hope, readers, that you won’t switch off, because it’s rather interesting.

Since climate change is not controversial in the slightest anymore and the science has been verified to my liking I will publicly declare that I believe global warming is happening; and I have a fair few green habits to support this belief. I thought I was reasonably informed about the state of the Earth and this terrible post-industrial pickle we’ve gotten ourselves into, but after playing this I was astounded by how much I didn’t know. The game is designed to be educational and it was without me even noticing it (the best kind of education in my opinion).

I found out so much stuff, a lot of it fascinating to a nerd like me- and I found myself thinking about clathrate deposits while on the bus, without me even noticing it; how many games make you think about deep ocean deposits of methane? Not damn many.

Before you throw your nose up at me giving a game the virtue of being a half-coherent gauge of the Fate of the World (punny!), all of the research, models and algorithms are based on the work of the Professor for Climate Science at freaking Oxford. Argue with that at your own peril.

This is an addictive and satisfying game, if amazingly frustrating at times. It also contains a message that has, for once, successfully punched through the thick skull of a gamer like myself. I’m going to start adopting a hell of a lot more green habits now as a result of this, and I don’t think you could ask for much more for achieving what they set out to do; and in a videogame too!

If you like management sims and are looking for a challenge, look no further. Hell, you might learn something too.