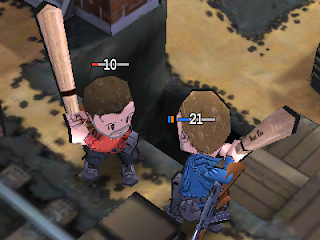 Danger Alliance: Battles is a cute little tactics strategy game that doesn’t try to be too much, but offers a nicely rounded experience for what is there.

If you’ve played games such as Fire Emblem for Final Fantasy Tactics you’ll know what to expect from this game. There’s two small forces arrayed against one another for each battle. In this instance, it’s five soldiers a side. Then they take turns moving around the map (in a square grid fashion), and following up by putting some bullet holes in the opposition. Once everyone has finished moving, it’s the opponent’s turn. Winner is last man standing.

The difference between Fire Emblem and this game is that there is no plot whatsoever in Danger Alliance. There’s a briefing (that isn’t really worth reading and tries far too hard to be funny) before each battle, and at the end of the battle you’re taken back to the main menu screen. There’s no campaign, there’s no unit levelling, nothing. It’s much like the multiplayer deathmatches of a FPS in that regard. If you happen to have played Dragon Quest Wars on DSiWare you’ll be right at home here. 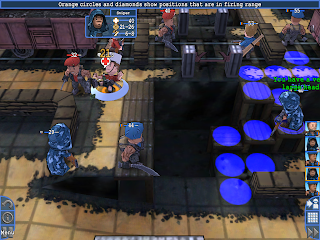 There’s a limited number of maps to play on (six), but they’re a well rounded bunch, and though small in size, mastering each of them takes some practice. There’s also a very limited number of units to choose between (six). The good thing there is that they all play very differently. The quick and melee powerhouse commando is very different to the allrounder grenadier who is different from the cumbersome but powerful range of the sniper. As you’re free to pick the units you want to take into battle before each skirmish there’s real room to develop a highly tuned team and within that seemingly limited scope is a lot of room for strategic depth – how many different pieces are on the chess board, after all?

A bit of strategic variety is introduced through the medipack system. In Danger Alliance, all soldiers on the battlefield can pull from a common pool of medipacks to heal allies that are close to death. They can be used at any time, even on a fallen comrade (you have three turns once an ally hits the deck to revive them via medipack, or they’re gone for good. Alternatively the enemy can melee attack a fallen ally to remove him from the game early). Choosing when to use these medipacks, and who should administer them adds that little bit of depth that makes the game all the more interesting. 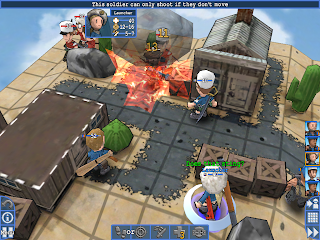 There’s three levels of AI difficulty, from the pushover easy through to the actually-quite-challenging hard, and two different ways to play; and out and out deathmatch and a capture the flag variant (which does a good job in adding more strategic layers to the game). There’s local multiplayer, but a crucial flaw in a game that is skirmish-based, there’s no online multiplayer, or even Game Center.

The real saving grace for the game is in the presentation, which carries a lot of personality and amusement. Character animations and designs are cute, and the levels themselves have a lush use of colour. The sound effects have some real impact – especially when the sniper takes down a charging enemy.

There’s not much else to say about the game. It’s limited, but it also knows its limits and is a game of quality over quantity. Hopefully a future update can toss us a bone with online multiplayer, but as a game that is quite cheap to buy into, this is an easy recommend for strategy fans that want something light hearted and for the occasional multiplayer bout.

Review: Fate of the World (PC)