While this won’t be a review (it’s not a game as such), I wanted to highlight a new iPad application, Codify, as it’s one that I feel is well overdue, and adds a heck of a lot of value to the iPad.

Codify is a project from a small Australian developer, Two Lives Left, and to the best of my knowledge it’s the first bit of programming software to hit the iPad. Yep, in other words, Codify allows you to make your own games.

The software is based on Lua, a lightweight programming language that is popular amongst game developers and takes advantage of the iPad’s strengths to make for an easy programming experience. What I liked about the software in the brief play I’ve had with it so far is how it uses colour to help formatting. Different important bits of information in the code are coloured for quick reference back, and indeed the general interface is clean and easy to navigate around.

As someone who is typically put right off by how complex code looks in its native form, those splashes of color also manage to make code look like it game from Apple itself. In other words, it looks clean, elegant and very, very easy to read.

Naturally, since you’ll be doing a lot of typing if you make heavy use of this, you’ll want a Bluetooth keyboard or similar for the iPad. Tapping out World of Warcraft (which uses Lua) on the virtual keyboard would not be a pleasant experience. 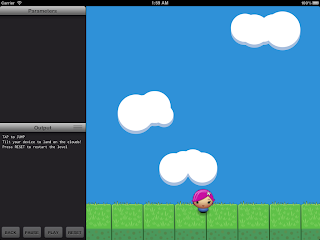 Being able to write code while on the bus or train, on a device that is as fun to use as the iPad, is a really great experience, but Codify isn’t perfect. Possibly the most critical “flaw” (though completely understandable) is the simple fact that the application won’t teach you how to code. There’s a huge number of sample projects which you can use as reference, but without an understanding in Lua, or reference books, you’re probably not going to get too far here. Then again, anyone who would be interested in this application will likely either have already, or be willing to invest in reference books, so it’s a bit of a moot point.

I also have some grave concerns with the software for the more experienced programmers. Yes, for Lua newbies such as myself, the included range of sounds and graphics are enough to play with, but more serious developers are probably going to want to use their own graphics their own sound effects and music and most importantly, they’re probably going to want to be able to share, sell, or otherwise distribute their content. As far as I can tell, there’s no way to get your completed projects out of the Codify application at this stage.

All of which I would suspect will be remedied in future updates, though, and even if they aren’t, for less than $10 Codify is a superb little training tool for programmers on the run. They can use it to experiment, extend their understanding of Lua, or tap out quick ideas when inspiration hits. It is about time this kind of application started popping up on the iPad.

Now, for us programming dunces, where is RPG Maker: iPad edition?

If you are using this application, or would like to chat about making games on iPad in general, please do come say hello on our forums!