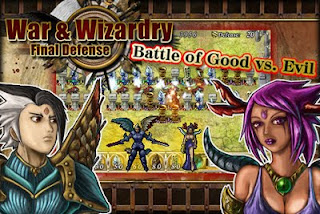 Ezmobo have released a new tower defence title that’s meant to be an innovative move away from the classic styles of the genre by incorporating RPG elements. Some would say that releasing yet another tower defence game into an already saturated market could be considered a mistake, even if it is original. With such titles as Plants vs. Zombies and Tiny Heroes already claiming the majority of players, has War and Wizardry TD (W&W TD) got what it takes to etch its name into the market?
Welcome to a world where the forces of good and evil have kept a truce on the land for the past thousand years, a land where gods and demons have been locked in a stalemate of hostility. The time has finally come for Nox, the Queen of the Underworld, to lay siege to the planet and attempt to destroy the forces of Heaven. With an army of malevolent creatures at her beck and call, Nox will send wave after wave of hideous monstrosities to die on the blades of the gods in an attempt to wrest control of the land, and Heaven, once and for all. Standing in her way are the gods themselves, beings of almighty power who you can control to aid you in your defence. 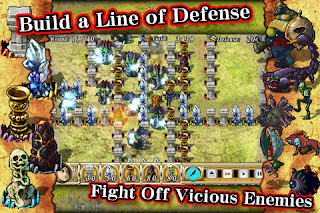 Introducing the “Gods System”, W&W TD gives you an unprecedented advantage over your enemies by granting you control of one god in every battle. Each god has unique abilities so using them wisely will be the key to success. The further you progress in the game the more gods will become available to you. Furthermore, every time a god attacks an enemy they gain both XP and SP. XP is experience that will help your god level up and become stronger whilst learning new abilities, while the SP is the special power you need to collect to be able to cast your magic attacks. These RPG elements have lent themselves well to the tower defence genre and are decently incorporated into W&W TD.
Other RPG elements that provide something a little different to your usual tower defence game are the ability to pick up special weapons for your gods and the ability to infuse souls into your magic attacks to customise the way your god participates in battle. This is a great little feature is it allows you to modify your god to better suit your style of play. The more standard aspects of the game are a variety of five different towers, all with their own attacks, that you can place almost anywhere on the map, as well as the usual hordes of demons attacking in single file from entry points on the map. 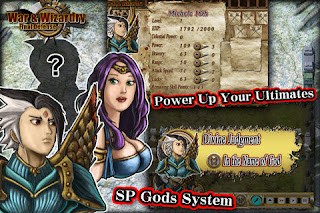 The graphics are relatively detailed but would definitely be suited more to the iPad than the iPhone (which is the platform that the game was originally aimed at). Another minor foible is the fact that the game was made for the Chinese market and so, despite a great effort to translate everything appropriately, some of the words are spelled wrong. Probably a minor detail that many wouldn’t notice but it’s definitely one of my pet hates.
With a good variety of monsters who will require different strategies to contain, War & Wizardry TD is not only a great example of what makes the tower defence genre so addictive, but it actually takes it a step further by incorporating RPG elements that you might not normally see. All in all, the game is fun, challenging, addictive and different enough that it’s worth having a look at if tower defence is your cup of tea.

Ratchet and Clank: All 4 One beta opening for select players