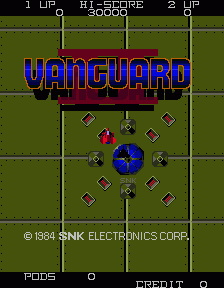 One of the latest games in SNK’s batch of arcade-to-Minis ports is Vanguard II, a space shooter from 1984. The original Vanguard received a fair bit of recognition in its heyday, but Vanguard II was not as fortunate. It’s certainly understandable – this sequel ditches nearly everything that made the original what it was. Altering the formula of the original for the sake of ingenuity is fine, but this follow-up just feels like a step backwards from the solid gameplay once offered.

The objective in each stage is to destroy 10 pods, which causes the enemy core to open. Once you dispose of the core, you’ll advance to the next stage in typical 80s shooter fashion. You’re free to pilot around the level and dispose of whatever target you wish to at your own leisure, but some arrows denoting where targets are would have been nice since some stages can get rather expansive. In terms of weaponry, you’ve got the standard bullets as well as heavy-duty missiles that can destroy the terrain below you with ease. One hit will destroy your ship, so you need to be cautious and alert at all times – lest your game come to an end. 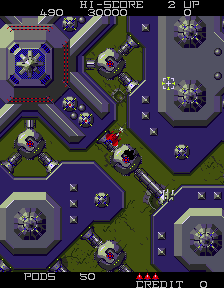 The controls are relatively awkward, in all honestly. Your spacecraft moves in eight directions, but that doesn’t necessarily mean it manoeuvres well. For example, if you want to move left when you’re facing the right, you can’t simply hold tap or hold left to have the ship change sides. Doing this causes the ship to slow to a complete halt temporarily. Instead, you need to do a circular motion with the D-Pad, rather than an easy and instantaneous swap. While this is undeniably more realistic, it doesn’t aid the challenge in feeling any more legitimate.
Firing bullets and missiles while constantly moving is not a simple task. Furthermore, holding the button down does not trigger a rapid-fire function, so you need to constantly tap the button to keep shooting. It’s not exactly painful on the hands, but it just feels like more work than it really needs to be.
The Minis version introduces several options for those who are less accustomed to space shooters. With the “immortal” option, you’ll never run out of continues and will be free to complete the game at your own pace. You’re still susceptible to enemy fire, but it does make things less stressful for newcomers. The other tweaks are intended for intermediate and advanced players, since you can play with how frequently bonuses will appear and how many lives you want to start off with. It’s a tough title, but those with devotion can overcome it eventually, through the use of extraneous options. 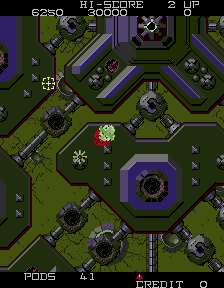 For 1984, these are some of the finest graphics you’ll find (Dragon’s Lair doesn’t count, folks). All of the sprites are polished and exert a level of quality that was unseen in this era. Best of all, the backgrounds are clear as crystal and some still manage to look good today. With the combination of colours being used though, the crimson bullets don’t always stand out very well, making it sometimes taxing to spot enemy fire. Disregarding the camouflaged bullets, this one has visuals that stand up to the test of time. There’s not much music to speak of, since whatever subtle background noise there is gets drowned out by the blaring sound of your weaponry.
Don’t get me wrong – Vanguard II is not a bad little game for what it is. The problem lies in its tendency to leave you searching for long periods, and then get you killed for either not seeing enemy fire or your muscle-memory reaction. When push comes to shove, it can offer up some decent entertainment for the price, but it’s not the quintessential shooter on the Minis service.
-Clark A.