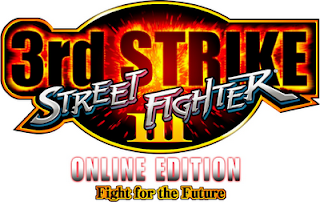 If you were a fan of fighting games in the nineties, $10 says you had played Street Fighter II at some point. With more than five different versions on multiple consoles and in the arcades, Street Fighter II was everywhere. All of these rereleases only made us wonder when the true sequel, Street Fighter III was coming. When it finally came, six years after Street Fighter II, it seemed as if Capcom had waited too long. The popularity of the Street Fighter series was beginning to wane and as a result, many missed out on the much anticipated follow-up.
What is it like to finally play the third game, injected with online play and new modes?
Right off the bat, it’s worth noting that this character roster is remarkably different from any Street Fighter title before and even after it. Aside from Ken, Ryu, Chun-Li, and Akuma, most of the fighters were brand new, Final Fight characters, or not previously featured in the main series. Some of them went on to appear in Street Fighter IV and its subsequent expansions, but Street Fighter III is home to more obscure faces like Remy, Alex, and Elena. With a total of 20 fighters to choose from, the amount of variety on offer is not at all shabby. 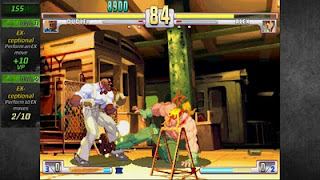 The core gameplay mechanics offer the same fine-tuned experience we’ve come to expect from Capcom’s fighting titles. Broadly speaking, every character has three punches and three kicks, each with varying power. For example, light kicks will reach your opponent quickly, but do minimal damage whereas heavy attacks can dent your opponent but leave you open in the process. For those not in the know, special moves are executed by pressing buttons in conjunction with analog movements. A light punch combined with a sideways movement can cause Ryu to expel fireballs from his palms. The sheer variety of different moves and subtle altercations are astounding when you have 20 fighters – you’ll see everything but the kitchen sink. The game also introduced mechanics like the Super Arts, leap attacks, and parry system. It will take a master to absorb everything.
Even today, pulling off combos and basic moves is as fun as it always was. If you started the series with Street Fighter IV, there’s a good chance that you won’t be able to execute some of the more difficult combos in the game. IV is a lot more generous than previous installations, so you need to make sure you have your mechanics down-pat. It may also be worth investing in an arcade stick, should you want to play the game at highly competitive levels. The vast majority of fighting games require dedication, and 3rd Strike Online is no different. 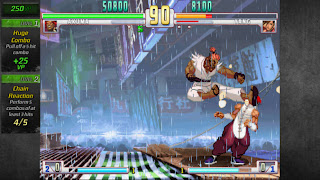 You can probably make your way through the lower difficulty settings in Arcade mode with some intellectual button mashing, but you’ll want to spend some time practicing the basic moves. There’s an awful lot of stuff to learn, yet the more casual players will still be able extract some amusement value.
The main event, the online mode, is indeed worthy of its spot in the title. Beyond simply bashing random players based on your specific search preferences, you can also speculate fights and participate in tournaments. Should you have a particularly exciting match, you can upload it to YouTube – a terrific addition for fighting aficionados. I cannot speak for the quality of the 360 version’s online play, but past examples lead me to believe it will run more smoothly than on the PS3. Just keep in mind that your enjoyment of the online mode will depend on your skill and that, as a niche fighting game, hardcore players are going to flock to the online lobbies.
3rd Strike Online also offers a new mode called Trials. Simply put, it’s a way for players to learn new combos and practise executing them with guidance from the computer. Unfortunately, that guidance is effectively limited to telling you what to do. No criticism is offered to help you improve – you’ll never know whether your timing is off, get any helpful hints in positioning your character, or know what would be most effective. However barebones it may be, the Trials mode will get the job done for the hardcore players. It’s just unfortunate that many newcomers will struggle incessantly. 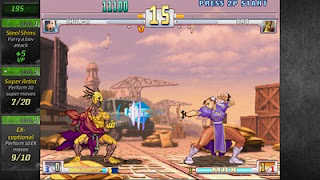 The animation is a lot smoother than Street Fighter II, with some particularly fluid character sprites. As far as traditional 2D fighters go, this is one of the standouts (logical since it was released when arcades were losing steam as opposed to the prime days). It does help that the game has been optimized with filtering effects. As for the soundtrack, it is somewhat of a departure from previous games. It features a variety of genres such as rap, jazz, techno, and hip-hop. Each combatant is accompanied by his or her own theme song. Remixed tracks have been composed specifically for this version, so you can anticipate a rather meaty auditory experience.
Ultimately, this is one of the best fighting games you’ll find on the downloadable market or retail. It has some noteworthy shortcomings, particularly the Trials mode, but it’s still the definitive version of Street Fighter III – a worthy alternative to any 2D fighter.
-Clark A.