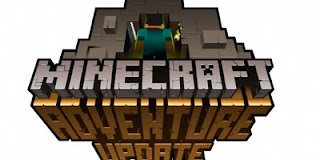 It’s here! We’ve been waiting for so long and it’s finally here! Notch and the rest of Mojang have been teasing us with delicious little bits and pieces for months, but now we can sink our teeth fully into the cubic cake of the Adventure Update. There have been some massive changes in this installation, and my word limit won’t let me cover them all but I’ll do my best.

The basic gist of Minecraft remains the same. Creating and destroying blocks to build whatever you can imagine. However, 1.8 gives you more to do besides that. The basic point of the Adventure Update was to flesh out game mechanics in the combat and exploration department, and Mojang have succeeded brilliantly in doing exactly this. However, it’s not without compromise. A few features promised by Mr. Notch haven’t come to fruition yet, and the update’s been split into two. The XP bar in your brand new HUD is a testament to the things to come; there’s no leveling/currency or whatever they want to do with it yet. It’s purely decorative. It can be amusing if you’re the kind of player who likes filling up empty bars with colours.
Despite the useless XP system right now, everything else in this update is solid gold. The combat system has had a sorely needed facelift. Before, you would blindly swipe at zombies hoping you’d click enough to beat them away and stop them from eating your delicious brains, but now it’s far more sophisticated. Whilst sprinting (which is easily the best new feature of all), hitting an enemy means they go flying! Bows are now hold to charge, which makes a whole lot more sense, and arrows now stick into mobs and stay there. I cannot stress enough how satisfying this tiny change is.
To practise your new ninja skills you get 3 new mobs to try them out on. One is a spider clone which only spawns in mineshafts to poison you, another is the silverfish (being dubbed the zerglings of Minecraft), and finally the terrifying Endermen. Suffice to say creepers blow up your house, Endermen ruin your life and haunt your Minecraft nightmares. Don’t look at them! 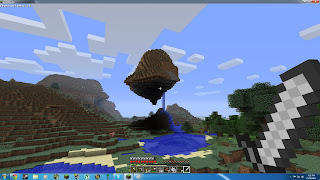 The hunger bar is the most interesting change to gameplay because it forces you to act and build differently. You will now need food for almost every activity. If you do not eat, you will not heal (as before) and if the bar drops to zero, your health is reduced to 5 hearts, half your total health. This is interesting because it has made settling down almost mandatory. Farming was never essential before, and it was boring. Now it is a key part of every settlement, because if you want to do the majority of the cool things in the new update you will need lots of food, and hunting is just not reliable enough, despite having all passive mobs except for sheep now dropping meat. What is does, essentially, is tie you down. I don’t mean this negatively; as a matter of fact I welcome it, especially with all the new and interesting crops and farming methods.
The map generator has received an overhaul. The swamp biome is now more swampy with the inclusion of vines and the land being far more broken up, mountains are more mountain-y, ravines now give you new ways to fall from great heights and break your legs, the map will now generate far more floating islands than before, NPC villages now spawn on flat areas, rivers flow through continents and biomes, oceans are deeper and wider, strongholds now appear, natural mineshafts generate deep underground and now biomes are far bigger. I cannot begin to express how many things this has fixed, nor how amazing they are. By having these astonishing landscapes, it truly does reward exploration, not only in the treasure chests you’ll find but in the freaky land formations you’ll end up screenshotting.
There are still a few flaws to be worked out here, though. I found on server maps that the world would sometimes generate in a very unnatural manner. Chunk outlines were obvious in some places, but as with the whole of Minecraft this is still a work in progress. It’s still damn fine though. If you’re a nomadic player like me just out for whatever the map algorithm throws at you, this is truly a delight. “Steve” won’t need to wander absurd distances in order to find awesomeness because it’s all in his backyard now.
There are dozens of other little microscopic changes in this update that make things so very much easier to do. Lighting has been an issue ever since smooth rendering came out, the common complaint being it was too dark. Now torches and other light sources have a much warmer, slightly brighter light. Moonlight now has an eerie bluish glow to the world, which just makes all the monsters running after you all the more terrifying. 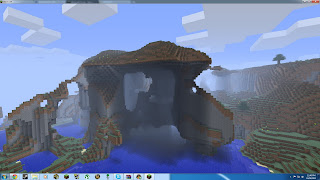 The multiplayer screen now lets you save IPs to your favourite servers so you don’t have to copy/paste in your addresses every time you want to go play with your clan. It also provides you with server pings, and whether or not the server is up. When in game, pushing TAB will give you a player list and everyone’s connection strength, so you know exactly who to kick for lagging everyone.
The launcher itself has changed. Instead of the dirt texture, it now shows a pan of a landscape through a translucent filter, which just adds so much more colour to the dreary menu. The hilarious splash text that accompanies it now has new messages, for those true addicts like me who had exhausted the previous 170+.
There are niggly bugs here as well though, as is traditional in Minecraft. My informants report to me that 1.8 isn’t very Redstone friendly and they’ve had to postpone updating the server until Mojang addresses this.
Other than this, there aren’t terribly many glaringly huge game-breakers here, and the ones that are a problem are very quickly patched by the staff within a few hours. Overall, I must say the Adventure Update of Minecraft has lived up to the hype, something that happens oh so rarely in this industry. In this installation, Mojang have done exactly what they had set out to do. We fans feel very spoilt.
If you haven’t bought Minecraft yet, do it now! You’re missing the times the community will look back on with nothing but fun memories of exploration and combat. Brilliant. Utterly, utterly brilliant.