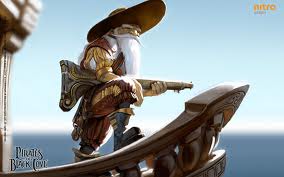 Pirates of Black Cove has its heart in the right place, and is generally speaking a fun, twee game. But it is seriously let down by getting overambitious and throwing too many good ideas into one package, without taking the time to execute those ideas properly.

The result is a game that’s not quite sure what it wants to be. This is the kind of project that Rockstar Games would relish, but they’d also take five years to carefully fine tune everything going on. Nitro Games was clearly working on a tighter budget than that, so the result is a game that is lesser than the sum of its parts.

We’ll get to the let-downs in a moment, but to kick things off on a pleasant note: Pirates has charm in spades. When Paradox Interactive isn’t publishing hardcore strategy games, it has a great sense of humour; after all, it published Magicka and took it to E3 with one of the greatest spoof poster ads of all time. (and churned out this awesome little video).

That same sense of humour infuses every element of Pirates. From the visuals, to the overblown dialogue, the mission structure and the music, everything is so over-the-top and a self-referential cliché that it’s impossible not to chuckle. This game is aimed squarely at the people who jump in on the pirates vs. ninja debate and managed to sit through the Pirates of the Caribbean sequel films.

The game kicks off with a short introduction and plonks you down in control of a small beginner’s ship. There’s an icon pointing to your next mission, but otherwise you’re free to sail around, firing guns at bigger ships and looting shipwrecks for the blueprints you’ll later upgrade your fleet with and the like. The world looks much like a toy playground with brightly coloured ships bobbing around in plastic-sheen water. 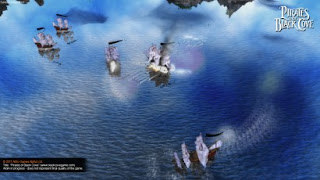 The problem is that it’s not very exciting. You inch around the world, crawling towards your next mission location. Although there are some hidden objects floating around, there’s not much incentive to actually explore the world. This slow pace is necessary in later missions, where there is a lot to manage on screen at once, but in those early hours it’s a real drag on the patience.

As with other games with a sailing element, controlling the boats is a learning curve of its own. The turning arc is slow, and you’ll need to angle the ship to fire from either side. At its best, and with plenty of practice, this opens up a system of elegant to-and-froing as ships circle around to line up the best shots. Many other times, it’s a slow and ponderous process, with the winner and loser determined by the person with the biggest guns. Accurate, perhaps, but it’s over far too slowly for predetermined outcomes to play through.

It’s not the only part to the game, though. There’s also an “on ground” element which plays out like a very light real time strategy game. Here you’ll lead a few squads of pirates to hunt out enemy leaders or complete other simplistic objectives. You’ll need to build these squads before the mission and complete it with what you’ve got. 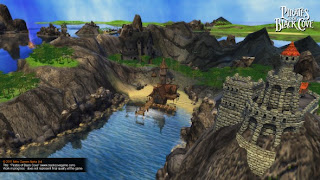 The problem is that this side of the game is outright broken at times. Your units’ pathfinding is downright terrible, and you’ll need to rapidfire click to get them to get them to do what you want them to do at times. Furthermore, while the system works fine when there’s only one or two enemies, when there’s a swarm, the screen gets too cluttered and you’ll just have to sit back and watch the action unfurl; it’s simply too hard to pick out and select single units or characters amongst the rabble.

Those squads that you’ll be grappling with in frustration come out of your home town (and indeed, that’s where the ship building and upgrading happens). This hub is remarkably uninteresting given the rest of the game’s personality – there’s not many folks to interact with, and little more to do than build up your various unit factories and accept missions. The town management is quite light, but gets the job done and it’s fun and rewarding enough to see your options and army grow out. The reputation system works across a number of different factions, and it’s fun to ally yourselves with your favourite forces, but as with most of the rest of the game, there’s nothing here that we haven’t really seen done better in other games before.

So there’s three games in this one package – the sailing, the ground battles and the town management. All three are light and breezy experiences, elevated to be genuinely entertaining thanks to the genuine sense of humour. Unfortunately none of those three games play that well, meaning that Pirates is at best a standard game that pirate fans will enjoy then forget, and ninja fans will shrug at and wonder what the fuss is.