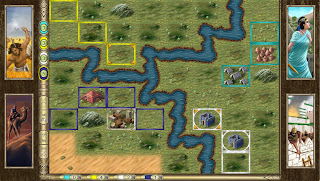 Bronze, a video game board game by Shrapnel Games, is about to be defy a trend; where most board games later get video game equivalents, this board game is making the move from video game to the tabletop.

Not that we’re complaining, Bronze is actually really good (check out the review on Digitally Downloaded). Like the best Eurogames, Bronze is easy to pick up, difficult to master. In the hands of Spiral Galaxy Games, we have high hopes the table top game will be a success.

In a release, Spiral Galaxy Games’ Dave Gilham said, “Bronze caught my eye on BoardGameGeek and having played the demo, and then the full version, I was intrigued with the game play. It’s enjoyable, it’s fast, there is no luck , you win or lose based entirely on your planning and tactics. The different maps and tribes leads to a great replay ability. All good points for a Euro style game.”

It’s going to be a while before it hits stores – it’s currently on the way to play testers for the initial run through. The commercial release is expected for the second or third quarter of 2012.

The promise is that the game will look like its PC equivalent, again that’s not a bad thing.

Stay tuned for more news as it comes in.