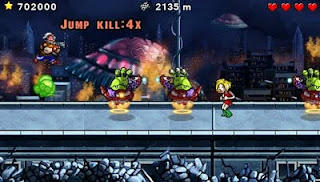 Say what you’d like to, but gaming has become a big pile of clichés: World War II, Alien Invasions, Zombies, Post-Apocalyptic, Fantasy Worlds, etc. These clichés dominate our gaming worlds and sometimes take themselves way too seriously about it.
Well, what would happen if you combined all of these gaming clichés into one game, threw in a bunch of guns and jetpacks, and featured a radically subpar hero that is as much a cliché himself as the environments? You’d get One Epic Game, and Grip Games has performed this unthinkable feat and slammed the game on the PSP Mini service for 3.99 USD/ 2.99 EUR while they were at it too.
Grip Games is no stranger to the PSP Mini service, as it has already released three other quality Minis as well: 5-in-1 Arcade Hits, MiniSquadron, and Blimp: The Flying Adventures. The company has quickly made its name in the world of PSP Minis and One Epic Game just continues the companies climb up the ladder as a premier Mini provider for the service. But enough praise for the company, let’s get down to business and find out if this game can live up to its namesake once and for all. 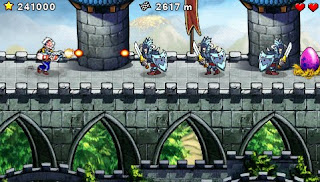 Firing up the Story Mode and meeting our burly, cybernetic goggled wannabe hero Alpha Dog is how you’ll want to take your first step into this world of clichés. Be prepared to laugh from the onset as the story launches into action in comic book styled storyboards with a fearsome zombie (cliché) saying “BRAAAIIINNNSS” (cliché) and our smart mouthed hero’s humour begins as he spouts back with “why can’t there be a single action game without zombies in it???”.

Everything from the tutorial level to the overly clichéd evil villain – that unsurprisingly wants to destroy the world with a vile mix of clichés – is poked fun at during each storyboard, and we found ourselves rolling in laughter during each of them, heck we even bruised our ribs laughing during the end credits. The writing here is superb and the highlight of the entire story mode, as everything from the classic movie Back to the Future (an entire gameplay mode gets this fantastic cliché!), to the current status of the gaming industry are lampooned in order to gain a good laugh.

So we know it’s funny, but how does it play you ask? Anyone who has played an auto-running iOS/Android game will feel familiar with the gameplay style, but here it’s vastly improved. Instead of just tapping a touchscreen to jump over obstacles/gaps as the character constantly runs to the right in constantly increasing speeds on a 2D plane, Alpha Dog can do something else too; he can shoot weapons, bringing the amount of buttons used here to a whopping total of two. While that may sound like a minor addition, it actually adds a great deal to the ‘tap one button/screen to jump’ gameplay we’re used to and brings a 2D platformer feel to the game. Obtaining jetpacks allows for the ability to fly for short periods of time, and in Super Mario style, enemies can be stomped to death as well. 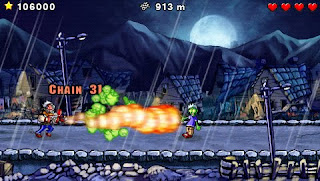 It’s a simple concept that works and it’s highly entertaining, and where most iOS games of this type feature one level that you replay over and over ad nauseam, here we get five themed worlds (remember those clichés we spoke of earlier?), each packed with its own unique enemies and obstacles, as well as multiple gameplay variations: Run X amount of meters without killing an enemy, Kill X amount of enemies, Fly X amount of meters with a jetpack, etc. Once the hour of two of the Story Mode is completed – skill level depending – Free Run and Challenge Mode will keep gamers playing for hours longer.

Think we’re done yet? Oh, it keeps on getting better. The gameplay is spot-on, we already know that, but the visuals are perfectly fitting too, with each themed world beautifully crafted in a colourful 16-bit style reminiscent of the SNES/Genesis days of old. The game looks just as good, if not better, than the best games of that era and the soundtrack is even better. Each world has its own soundtrack loop and all of them are absolutely fantastic. From the pulsing rock of the zombie outbreak to the rock/orchestral mix of strings, guitar and Celtic vocals of the fantasy kingdom, each one is worthy of blaring through the speakers full blast. Throw in a multitude of weapon pickups and a Hall of Fame feature full of challenges to gain 100 per cent completion status and claim ‘Epic Gamer’ bragging rights, which will take skills of epic proportions, as some of the gold level challenges are extremely difficult, and you’ll see there is a lot of gameplay here. 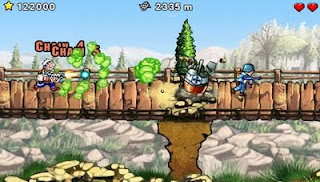 While there are a few hiccups along the way, thankfully none of them of epic proportions. On most of the levels, once the 1000m mark is passed, a checkpoint is activated and helps to keep extreme frustration at bay, but the levels are randomly generated, and at times seemingly impossible sections tend to generate once you’ve spawned at a checkpoint. Once you’ve survived the hilarious Story Mode, the other modes tend to get a bit repetitive during extended playtimes, and from then on the game is best enjoyed in brief sessions. Also, where online leaderboards were featured in Blimp: The Flying Adventures, they sadly missed the jump into the game here, which is a shame as it would have given the games long-term replay value a boost. But, even with its shortcomings, the killer soundtrack and action packed gameplay will make sure this Mini stays on your PSP
One Epic Game isn’t overly deep and it’s also not exactly ‘epic’, and it’s not supposed to be as the games name is a cliché in itself. The game makes light of nearly every major cliché in our current gaming world and pulls it off brilliantly. Grip Games definitely has a firm grip on the PSP Mini service, and with games like this, we can’t wait to see what they’ll come up with next; more Alpha Dog please! One Epic Game takes a simple gameplay premise and turbo charges it, and pulls off what just might be the most ‘epic’ autorunner games available.
– Christopher I

Editorial: Why video games are related to Norway killings, but not responsible for them