I’ve been playing games since the original Game Boy, and I enjoy a bit of just about everything. And as I’ve become financially independent, I’ve been able to afford more consoles and more games – this generation I’ve got just about everything bar the Xbox 360, and the only reason I don’t have that one is, quite literally, a lack of physical space to put it.

Looking to the future, I’ve got my eyes set on the PlayStation Vita, the Wii U and I look forward to the 3DS hitting its stride. I’m also planning on investing in OnLive should it ever reach Australia’s shores and networks.

The iPad is my favourite gaming device. Here’s why: 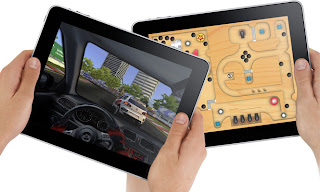 It’s often misunderstood just how big the iPad’s screen is. At 9.7-inches, it’s far, far bigger than any dedicated gaming console, and yet it’s just as light. This means it works equally well in the home for use on a comfortable chair or in bed, or on the go – sitting on trains or buses or the like. The screen is also of an exceptional quality for everything from playing games to watching movies, reading books and magazines, or using the Internet.

But here I’ll just be talking about the games. The iPad as a gaming device is unfairly ignored by many as a gaming device: those who haven’t spent much time playing with one think its limits are at PopCap games and Angry Birds. Those are on there, yes, and actually happen to be a lot of fun in short bursts, it’s not a bad thing that the iPad has a lot of quality casual games, but there are plenty of chunkier games available through the App store and, with that lovely, massive screen, it all looks wonderful.

As a gaming console, the iPad excels, far better than any other device out there, at certain genres. It is the best place to go for board games, other than an actual board game store, and more importantly, the board games on the iPad tend to a very accurate recreation of the actual experience of playing a board game.

For strategy games, there’s plenty of variety too. From the more casual Tower Defence games through to the likes of Command and Conquer and the hardcore turn-based strategy of Romance of the Three Kingdoms the iPad has me covered. It also has quality “Civilization” style games (Civilization Revolution, Ascendancy, History Egypt Engineering an Empire), Tactics games (Highborn, Wesnoth, Tactical Soldier: Undead Rising). There’s also Final Fantasy Tactics on the way, we understand. The really good one.

Developers are also coming to grips with genres that haven’t worked in the past on the iPad. There are now very playable sports games, such as NHL 2K11 and FIFA. There are quality platformers with the likes of Max and the Magic Marker. There are racing games as Sonic All-Stars Racing, and even traditional, 30+ hour RPGs like Avadon (and if Avadon is anything to go by, those games work even better on iPad). There’s a growing market for premium priced content on the iPad, and developers are now starting to put out games that rival the quality of other handhold console games.

Heck, there’s even a (small) chance we’ll see World of Warcraft on the iPad, and that is something that neither the 3DS or PlayStation Vita will likely ever see.

And as for those genres that the iPad really can’t do because of the need for buttons – such as the FPSer genre, there’s an easy solution on the way – OnLive. Bringing true blockbuster gaming to the iPad via the cloud.

In the end, people buy consoles for different reasons – people buy Nintendo consoles for Nintendo’s games. People bought the PSP for its superb lineup of RPGs. The iPad, too, has strengths where is can’t be rivalled by the other consoles – such as for strategy, casual and board games, and thanks to technology like OnLive, will soon be able to play host to even bigger games.

So much for just playing Angry Birds, huh?

Are you also an avid iPad gamer? Feel free to drop into our forums and say hi!

Last chance to enter our Pride of Nations competition!