So, Final Fantasy III, which was released on the iPhone a few weeks ago, is now also available on the iPad, for the premium price of $Au19.99 – which also makes it Square Enix’ most expensive iOS game to date. The question is – at over twice the price of some of the biggest iPad games, is it worth the investment?

As we already said in our review, Final Fantasy III is a brilliant little retro title, and the 3D remakes happen to be of a very high standard. Without compromising the core gameplay (which introduced some of the most popular conventions from later Final Fantasy games, such as the job system), the upgraded visuals make the game feel like a simple, but modern release.

And on the iPad it looks absolutely amazing. By far this is the definitive version of Final Fantasy III, with accessible controls despite the lack of physical buttons. It remains a very addictive, very entertaining and quite lengthy quest – you’ll rack up plenty of hours with this game. If you’ve already played it in some form before (and especially if you already have the iPhone version) then it’s probably not worth the reinvestment, but if you haven’t experienced this game before, it’s one of the underrated titles in the decades-old series. 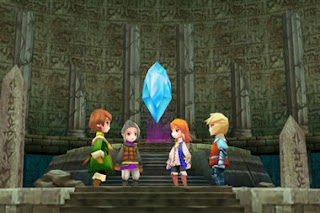 But is it worth $20 – a full dollar more than the modern Chaos Rings, and essentially, $10 more than any other RPG on the iPad worth buying? For a retro title which will actually cost you more than Final Fantasy VII, VIII and IX on the PlayStation Network?

We’d like to think so. One of the problems that games developers face on the iPad is the pressure to keep games prices low, which benefits the consumer to an extent (cheap games are good, right?) but as we’ve seen, doesn’t necessarily help developer’s profitability, and leads to an oversaturated App Store, which ultimately does damage to the iPhone and iPad as gaming devices – there’s little to no chance a full-priced game can compete in the current environment.

So, full credit to Square Enix for sticking to its guns and insisting on the value and quality of its games. Yes, they are a little more expensive than other games, but by the same token, these are games that are, realistically, worth that price of admission. If you are a fan of RPGs, support Square Enix and download this game, and then, hopefully, the iOS market will begin to shift back towards giving quality games a shot at being competitive.

Discuss this game, as well as your other favourite iOS games and Final Fantasy titles on our forums!
Share this

Fable 3 comes to Steam – with bonuses

Was DSiWare really that bad?