Running Pixel is a long-time supporter of the XBLA Indie Games platform, and has just launched its sixth title, Bouncing Avatars. 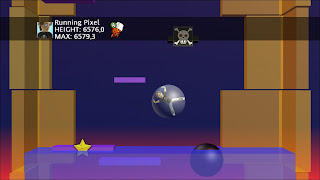 It’s 80 points, and stars the Xbox owner’s Xbox avatar. He or she is trapped in a bubble and can only bounce or climb upwards. The goal is to rise as high as possible while dodging dangerous objects.

That in itself might be too limited even for its low asking price, but Bouncing Avatars also features a multiplayer mode, which should be great fun in small bursts.

There’s also a Windows Phone 7 port of the game on the way shortly, Running Pixel claims.