Paper Wars: Cannon Fodder was something of a sleeper hit on the PlayStation Minis service. Now it’s coming to the iPhone and iPad.
The game, from developers IFun4All, deliberately tries to be a “bad” and “cheap” tower defence game, with paper drawings representing characters and weapons. Of course, it’s not actually a bad game at all. It’s good, simple fun, and should be the same on the iOS devices.
Game features include: 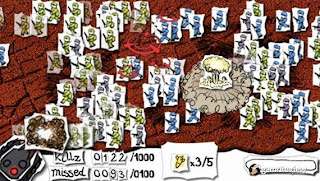 Alien Breed collection released on Steam as one package