I’m sure everyone is familiar with Tecmo Koei’s Warriors series of games. Whether they’ve played the games or not, everyone has seen the reviews, which inevitably slam each new release, dismissing them as mere “button mashers.”

However, having read some truly amusing examples of these reviews in my time (in one classic, a review of a Samurai Warriors game claimed the game took place during the Chinese Three Kingdoms era), I’ve realised that the Warriors series might well be the most misunderstood series of games in the west – after all, they are consistently rated highly by Japanese press. 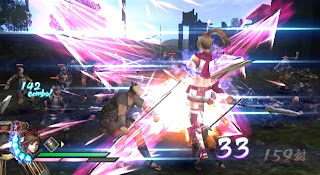 So why the discrepancy? There’s a couple of potential misunderstandings. Through this piece I’ll be referencing Samurai Warriors games, but the same can be equally applied to the other Warriors settings – I’m just more familiar with Japanese history and the setting of those games.

Also, full disclaimer up front – I am a fan of the Warriors games, but I am going to try and look at this objectively.
1) The Warriors games are not just about what happens on the battlefield.
This is probably this biggest reason there is a discrepancy between Western, and Eastern opinions on Warriors games. The historical context is important. The Sengoku period (warring states) of was responsible for a great deal of Japanese development. At the end of the era, when the dust from the near incessant fighting finished, the warlord who effectively took control of , Ieyasu Tokugawa, closed Japans boarders, effectively creating the isolationist culture that still exists to an extent today.
As such, the names, personalities and stories of the Sengoku period are well known to the Japanese – and in many cases those stories are epics of emotion and drama to rival Shakespeare or Academy Award winning feature films. Consider the story of Oichi, who was caught in a deadly war between her husband and brother. Or the rise of Hideyoshi Toyotomi, from peasant boy to the most powerful man in .
With a knowledge of those backgrounds, taking control of those characters and having the opportunity to reshape history is massively appealing. We’ve seen it in some Western games – Napoleon remains a popular story for strategy games, for instance. But most Westerners don’t know who Nobunaga Oda and Hanzo Hattori were, let alone the smaller characters in that era such as Motonari Mori or Masamune Date. That in itself is not surprising – a trip to a typical bookstore will not find you anything on these characters.
And in years past, Omega Force (the folks who develop these games) have done a poor job of properly introducing these characters to a Western audience. Perhaps because the games are developed with the Japanese in mind, where a level of back story would be unnecessary, but earlier Warriors games have been inaccessible as a result. More recent games – especially Samurai Warriors 3 – have done a much better job, however unappreciated it was.
2) The Warriors games are not button mashers.
Anyone who has tried to play a Warriors game on a higher difficulty setting would know this, but it’s a consistent mistake that the Western press make to claim button mashing will get you through these games.
Yes, you can button mash through the easier difficulty levels, and while you will be hitting a lot of buttons very quickly, on the higher difficulty levels you’ll also need to understand how the various combos work, how to make most effective use of them, and you will need to be able to block, dodge and have a counterattack strategy.
In most Warriors games, there’s also a degree of tactical strategy involved. The form this takes changes from game to game, but for instance, in Samurai Warriors 3 you’re standing on a large battlefield, and need to manage your time so you can complete objectives while protecting key people.
Meanwhile Samurai Warriors: State of (downloadable for PSP on PlayStation Network) presents you with a strategic grid to move armies around before engaging enemies.
Again, on the harder difficulties, these strategic elements will keep you thinking, which brings me to my next point…
3) Warriors games do change.
It amazes me that the Warriors games have a reputation for being unchanging. The series is constantly evolving – Samurai Warriors: State of is very different to Dynasty Warriors: Strikeforce for instance, which is in turn different to Warriors: Legends of Troy.
The differences are not just cosmetic. As mentioned already, the basic strategies are different from game to game. The level design and battle maps are entirely different each time. Online and Co-op has been introduced at points in the series. The ability to create your own character is a big deal for the first time in the 3DS launch title Samurai Warriors Chronicles. And speaking of 3D, Omega Force has managed to make 3D have a material (and for the better) impact on the Warriors gameplay.
By comparison, the original few Dynasty Warriors games back on the PS2 are limited experiences, short on features, and unrefined.
None of this is to say the Warriors games are perfect, that there isn’t room to improve, or even that they will find more than a niche audience outside of their homeland in .
But these games are given scores that are usually reserved for games that are downright broken. Those same reviews are filled with inaccuracies, making the Warriors series one of the most unfortunately misunderstood series’ out there.
What do you think of the Warriors series of games? Are you a fan? Discuss on our forums!
Share this