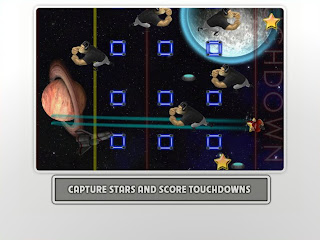 The start up developer and publisher’s newest game allows players to control gridiron superstar Steve Young as he runs down the field to collect stars, avoiding danger, traps and pitfalls along the way.

The game works on iPad, iPod Touch and iPhone platforms.

In a release, Vaporware Labs compared the game to a mash of paper or flick style football action with tower defence-style gameplay.

Accordinf to the release: Players control Steve Young by placing their finger on the screen and moving him around the backfield. Once Steve is lined up, players flick their finger, firing Steve towards the star and across the goal line to score. Players will have to avoid various obstacles on the field, including exploding land mines, tornadoes that fling Steve in random directions, teleporters, pinball bumpers, bottomless holes, running pigs and more. There are more than 80 levels in the game to be unlocked through single-player gameplay and four distinct themes, including traditional football, classic video game, space and horror zones.

As I said earlier – it all sounds like a very strange experience. But, like all Apple App store games, it’s reasonably inexpensive to try out, and there’s a charity message in here too: Vaporware Labs will donate a portion of game sales to Forever Young, Steve’s foundation established to help children with emotional, physical and financial difficulties.