Beached Az is one of those jokes that, thanks to the wonders of the Internet and YouTube, has a greater profile than it probably deserves. 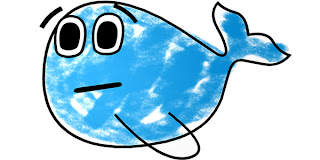 Following the plight of a beached whale, the show itself is a simple pun replayed over and over again – a gentle jab at the New Zealand accent, backed with a cheap but charming graphical style, and delivered in the kind of micro-length episodes that prevent the joke growing too stale too quickly.

Frankly, I love it. It’s the same kind of simple, innocent humour that saw other bite-sized shows such as Count Duckula, The Trap Door and Gregory Horror Show become genuine classics. And it’s pleasing to see that a group of Aussie start-up animators could find such success from such a simple concept.

Following up on the initial success of the YouTube show, the folks behind Beached Az have taken a shot at iPhone application development. Beached Az on the iPhone is not just a game, but rather a complete package of video interviews, episodes and character bios sitting behind a custom-developed game.

Which is just as well, because even at the cheapest price possible for a paid App ($1.19), the Beached Az game itself is probably not worth it. Like the show, the concept is very simple – the various characters in the Beached Az world are trying to pull the central whale character back into the ocean, and you need to protect them from a swarm of angry crabs by flicking them away. 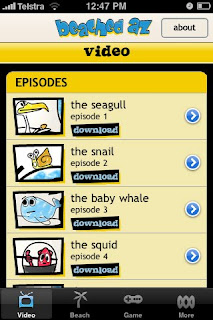 It’s typical of an cheap iPhone app game, but unfortunately there are better examples of this type of game out there. The problems start with the enemies themselves. You’ll lose points if you hurt a smiling crab, but the difference between the angry and happy crabs is literally a few pixels – not nearly enough when the game speeds up.

As your points start to drain away, you’ll also be assaulted by voice samples. While the terrible New Zealand accent is 99 per cent of the charm of the show, the voice samples are overused to the point of becoming annoying in this game. Thankfully you do have the option of turning those sounds off.

But otherwise the game plays just fine, and fans of the show will get a kick out of playing a few rounds. When you throw in the other features on the App, it’s well worth downloading, and we can only hope that Beached Az continues to grow in popularity and we see higher-budget games in the future.