I talk up (and enjoy) emulation consoles out of China (predominantly) a great deal. Indeed I almost find myself playing with my Anbernic and Powkiddy devices more than my “proper” consoles. So this week I thought it would be interesting to see just how pervasive these devices are, and what kind of market penetration they might have. Remembering that my readership is incredibly savvy about games, and a more mainstream outlet would get very different results, I still found the results from this week’s poll to be fascinating. 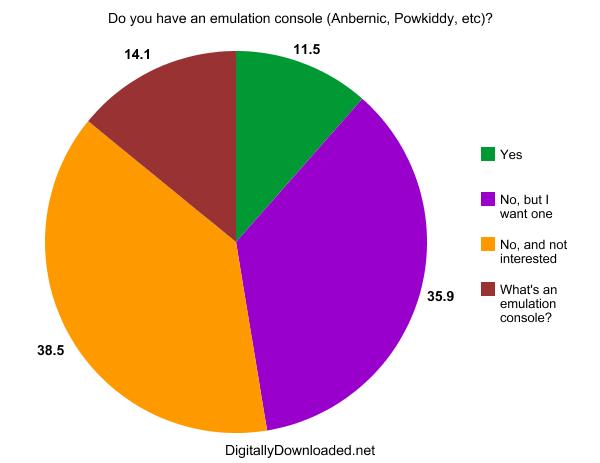 Almost half of readers either have one or would like to have one. Breaking that down further, 11.5 per cent of respondents have at least one emulation console, and a further 35.9 per cent would like to buy one. Presumedly one reason for the wait is that people are waiting for a console that meets their specific aesthetic interests, given that they’re already very cheap devices. Another reason (as one or two stated) is that they’re waiting on these devices to be able to run a particular console, such as the PlayStation 2, which current “generation” devices fall just short of.
Meanwhile, only 38.5 per cent of people have no interest in getting one, and when you think about it, that’s quite a low number. It means that only around one-in-three people have no interest in these devices, and based on the responses, most of those have to do with the users already having jailbroken PlayStation Vitas, or laptops that do the job well enough. I would argue that there’s an experiential component with a few of these devices, but regardless, I actually thought that this vote would be higher.
Finally, 14.1 per cent of people said they had no idea what these devices were, and that, too, seems low (except that most of the people that vote in these polls read DDNet and therefore would likely have seen my articles about these consoles).
While the data sample with this poll is particularly weighted towards a demographic that would be aware of the emulation scene and likely more inclined towards it, it is nonetheless interesting to see how an entire industry has sprung up in recent years, with the ever-improving console build quality and more powerful chips running in the background. It will be fascinating to see whether the “next generation” of these devices will be able to convert even more players, now that they seamlessly run most N64, PSP, and DS games.