News by Lindsay M.
Welcome to Digitally Downloaded’s regular catch-up news feature. With each issue we will bring you the best news that you may have missed. Grab the biggest mug you’ve got, fill it with your favourite brew, and catch up with us (and our favourite news anchor, Dee Dee)!
It’s been a few months since we last did a catch-up, and I’m absolutely delighted to be back twice a week to bring you all the best news from the world of video games.

New information about Blue Reflection: Second Light has been revealed

While we all wait for Blue Reflection: Second Light to be released (or even the announcement of a western release date), Gust and Koei Tecmo have shared a bunch of new details about the game. This includes in-game information regarding the world and characters, as well as the Japanese box art (below). 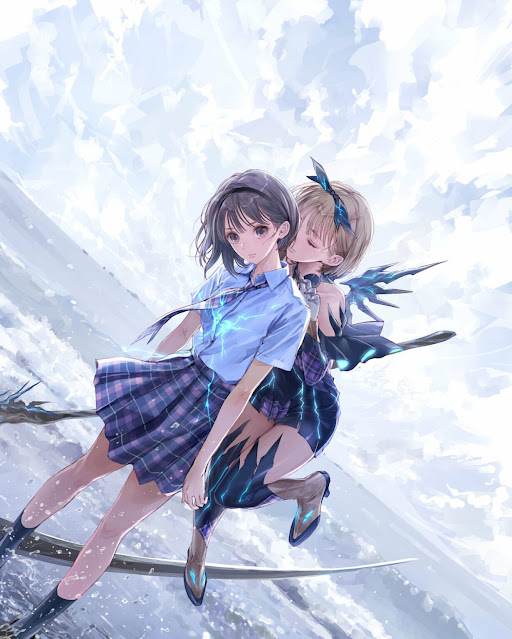 In the game’s world, there was once an area that included nothing but a school and some water. Out of nowhere, a new place (Kokorotope) appears, filled with random real-world objects. There are shining Memory Fragments to be found, each related to Kokoro’s lost memories. What the world actually is remains to be seen, but the girls also find ingredients and crafting materials there so it’s definitely important for multiple reasons.

The new character detailed is Shiho Kasuga, who who appears after “a certain event.” She is kind, smart, caring, and good at housework (because apparently that’s relevant). Kokoro does know Shiho, but she’s lost in those missing memories. Shiho helps connect Blue Reflection Sun (a mobile title available for iOS and Android in Japan) to Blue Reflection: Second Light. We also learn of a rather mysterious new character, someone by the name of RefleNavi who randomly appears in a group message thread. She gives them good information, but also listens to conversations she’s not part of and warns against going to Kokorotope.

Related reading: Check out Matt’s Blue Reflection review to understand why we’re so hyped for a sequel.

Blue Reflection: Second Light will launch for PlayStation 4 and Nintendo Switch in Japan on October 21. A PC release will happen later. There will be a western release, although as of now that date remains a mystery.

The Big Con launches next month

I’ve had my eye on The Big Con for awhile. Described by the developer as a teenage grifting adventure game, the title is about a girl who sets out to save her mom’s video store. I’ll get to the launch date in a little bit, but first, have a look at the latest trailer that also details a character voice contest.

Ali is a teenage con artist. Her mom’s video store is about to be go out of business thanks to some very immoral loan sharks. How Ali makes cash is up to the playerL she can pick pockets (and locks), use the power of persuasion, outright steal, sneak around, and make some big bucks off a current plushie fad. The adventure title is open-ended, and also includes puzzles and some great ’90s humour.

The Big Con is developed by Mighty Yell and published by Skybound Games. It will launch for PC, Xbox Series, and Xbox One on August 31.

Inked is finally heading to consoles

Inked: A Tale of Love is having its title shortened for an impending release on consoles – it shall now simply be Inked, as it is for its mobile versions. The romantic storyline almost takes a backseat to the gameplay and graphics, as the player draws their own journey through ten hand-drawn paper worlds. Emphasis on “almost.” Here’s the latest trailer:

The story is simple: our hero is on a quest to find love after a sudden change in the world. He’ll have to conquer many puzzles along the way, each getting him a bit closer. A magical paintbrush is used to draw geometric shapes to clear puzzles and obstacles in the way of the hero’s path to true love.

Inked will launch for PlayStation, Nintendo Switch, and Xbox later this year, along with an updated PC version. Specific PlayStation/Xbox consoles were not announced, but I’d expect PS5/4 and Xbox One/Series. The game originally launched for PC in early 2018, with a mobile version launching for iOS and Android early this year.

Card-based RPG Black Book will be released in two weeks

While some video game genres are experiencing a renaissance (hello, FMV!), card-based titles never really went out of style. Developers consistently find ways to make them more intriguing, and Black Book is definitely a title to continue keeping an eye on. The card-based RPG adventure game (such a mouthful) is set in a world based on Northern Slavic mythology, and includes an in-game encyclopedia created with the help of expert anthologists. Basically, there was a lot of effort put into the story, which is what makes me so interested. Here’s the release date announcement trailer:

Vasilisa is destined to be a witch, but decides to throw that away to marry her beloved – who then dies rather mysteriously. She sets out to find the Black Book, a demonic artifact rumoured to be powerful enough to grant any wish to the person who uncovers its seven seals. Vasilisa’s quest will have her solving woes of townsfolk by confronting demons and performing exorcisms. She even has her own demon flock, but if she doesn’t keep them occupied they get bored quite quickly…

Developed by Morteshka and published by HypeTrain, Black Book will launch for PC via Steam, PlayStation 4, Nintendo Switch, and Xbox One on August 10. There is currently a free demo version titles Black Book: Prologue available for PC and Xbox One.

Last chance! Win the brilliant EPOS B20, courtesy of EPOS and DDNet