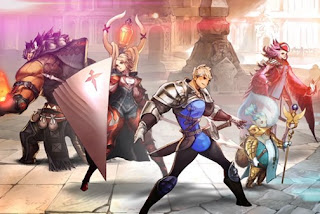 Don’t worry if you don’t remember Zodiac: Orcanon Odyssey from 2015. It was a mobile JRPG with some incredible production values, and was quite the decent game to boot. Indeed, we loved it at launch. But it didn’t make much of a splash at all, and sadly it faded into the distance quite rapidly and seemed like it was a lost game. Now, though, it seems like it is being resurrected. In Japan, at least. It’s now called Astoria Ascending, and rather than a mobile game, it will release on PlayStation 4 and 5, as well as Nintendo Switch.

Apparently, the game’s narrative is being significantly tweaked, to now be much more serious. Otherwise, it will be much the same game, though with a visual upgrade to account for the years in-between releases, and… about the only other thing that we know at this stage is that it will be out in 2021.

There’s no news of a western release, and given that the narrative has been edited (meaning there isn’t a valid translation of it), it’s not a sure thing that it’ll happen. I have my fingers crossed, though, as I wouldn’t mind giving it another spin. Stay tuned for more news as we have it!

Games and Literature: Why are so few games based on great books?

Finally, an Asterix & Obelix game I really want to play