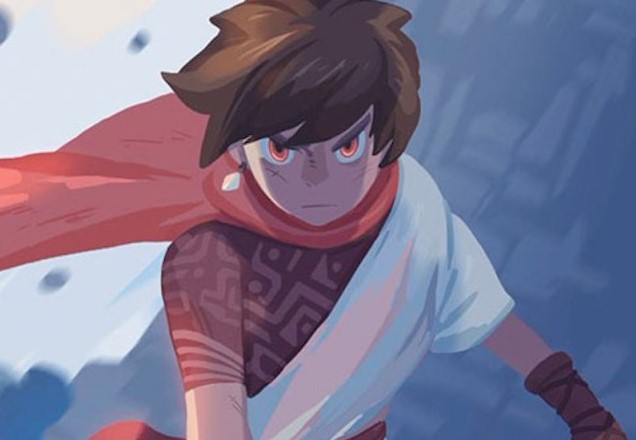 The premise of Incredible Mandy is simple enough – it’s a 3D puzzle platformer with particular emphasis on the puzzle side of things. It comes published by Circle Entertainment and developed by developed by Chinese studio Dotoyou Games, which also made the very charming Koi. Incredible Mandy is reminiscent of games like The Legend of Zelda and Rime (with the aesthetic bearing a particular similarity to the latter), but it’s much less interested in exploration or world building, preferring instead to provide an amorphous, very pretty, but ultimately generic world as a backdrop for its jumping puzzles. Pair that with a relaxing, non-threatening tone and you’ve got a great game for relaxing and unwinding, which feels especially at home on the Nintendo Switch.

The core draw of Incredible Mandy is the excellent puzzle design which remains consistently rewarding throughout the game’s substantial run time. This is perhaps a contentious point but I’ve not noticed too many 3D puzzle games lately which place as much emphasis on excellent puzzle design. Thinking back to the more recent Zelda titles (not the top-down ones), the puzzle design has occasionally taken a back seat to the exploration, world building, and combat. It’s rare that you finish a puzzle and leave feeling satisfied; that’s not to say the games themselves are bad, just that the puzzles aren’t the main event.

Incredible Mandy’s puzzles on the other hand are nearly always satisfying. By taking away exploration and combat, as well as plot events the player needs to tick off, the moment-to-moment gameplay is focused on problem-solving by using the tools afforded to the player. Each puzzle is fairly self-enclosed and can be completed with logic and observation. I haven’t been this satisfied with the design of a puzzle game in a long while, and that’s a feat considering this is one of my least favourite genres. 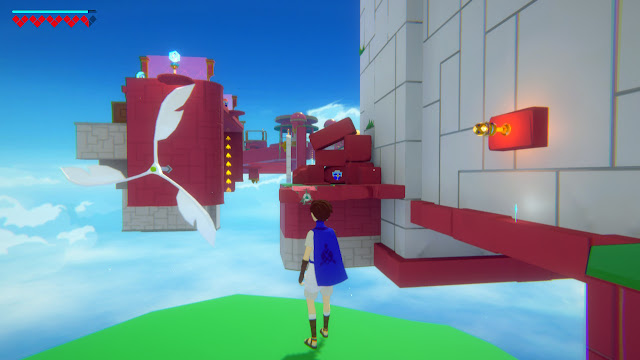 The mechanics are going to be immediately similar to anyone who has played a 3D Zelda game. The protagonist gets a sword with which to hit switches and can hold the button down to do a spin attack, creating a shockwave which activates switches in a small radius. You can also run, jump, crawl and climb as per usual, and you can also shoot a bow to hit switches from a distance. The bow is rather underutilised however, and features some confusing motion-control implementation which requires you to twist the Joy-Con on its axis. The unique mechanic in Incredible Mandy is that swords can be placed in the ground or in terrain, and then chained together so that each shockwave sets off the subsequent sword in the sequence. This chain-reaction technique can be used to open time-sensitive or simultaneous switches, as well as activate certain environmental elements from a distance. The other main mechanic is a robot which your character will need to guide through the level – this robot can help you by moving heavy objects and activating switches, further improving your ability to traverse the complex geometric pathways the game has to offer.

This set of mechanics cleverly encourages players to plan ahead and devise solutions. The game is split up into a number of worlds, each which have their own unique aesthetic and their own set of interactive environmental gadgets. For example, the first world is themed around clouds, and is home to spinning fans and wind-based puzzles. Meanwhile, the second world is forest-themed and will have you activating vines to crawl across vertical spaces.

Each world is bookended with a boss battle which tests players on their knowledge of the mechanics. It’s a classic puzzle-boss affair: the player needs to figure out how to access the weak point while dodging attacks, and then once the weak point is exposed, they need to hit it three times in order to defeat the boss. These follow in the same vein of design as the general puzzles, requiring a combination of planning, spatial awareness and timing – taking some time to complete. 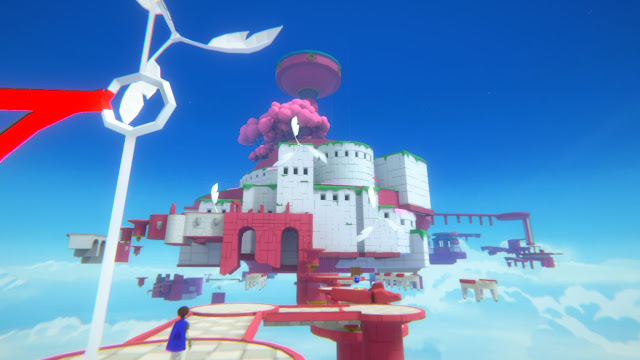 Aside from the bosses, there is very little combat in Incredible Mandy. This is overall a good thing; it allows for an increased focus on puzzle-solving without interruption, and maintains the game’s relaxing pace. It does mean, however, that the occasional health upgrade pickups that players can find hidden away in nooks and crannies in the level’s architecture are virtually useless. On other occasions players can find pieces of a comic designed to tell the game’s narrative, which features some excellent artwork and functions as a much better collectible item.

The game’s plot is sparse and up to interpretation, but seems to riff on the idea of Zhuang Zhou and the butterfly – a thought experiment about a poet who dreamed he was a butterfly, and upon waking mused if his human form was instead a butterfly’s dream. The gameplay of Incredible Mandy is set in a dreamlike world, filled with symbols and bizarre edifices, while the comics found through exploration tell a very realistic story about a boy and his sister. Overall the themes of protection, exploration, growth and healing are told through both, but the player is challenged to consider how the two stories intertwine and inform the meaning of the other. Of course, because the comics are hidden away in easy-to-miss locations, it’ll be up to the most dedicated players to engage with the narrative as the developers intended; for others, it’s perfectly OK to ignore this aspect and focus on the gameplay.

Lastly, praise needs to be given to the game’s aesthetic. The low-poly environments and abundance of bright primary colours adds to the world’s dreamlike appeal, and whether docked or handheld, the game is a marvel to behold. I particularly enjoyed the use of light in the protagonist’s sword attacks. The music also complements the soothing, ethereal tone effectively – it is a sparse piano score reminiscent of Breath of the Wild’s soundtrack, perking up in moments of tension and accompanying the protagonist through his walk across the game’s world. 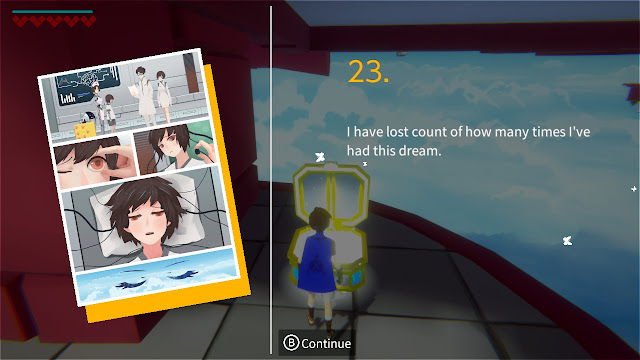 Incredible Mandy is a great example of design by subtraction, focusing on puzzle-solving and atmosphere and eschewing mechanics which do not contribute to the developer’s singular vision. The result is a game which evokes a particularly introspective sensation in the player – if they are able to afford the game their patience and attention despite the lack of combat or narrative tension, then they will be met with rewarding puzzles and a comforting mood. If this sounds like just what you need to unwind, then Incredible Mandy will be a game you are sure to regard with fondness.