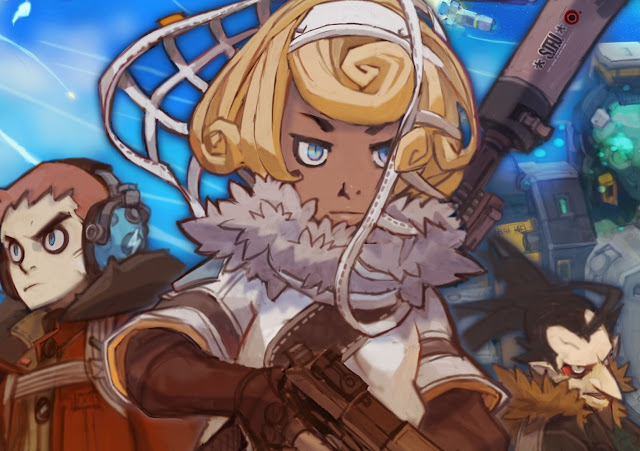 The year is 2008. Twitter has just exploded into the stratosphere, Instagram doesn’t exist, people still used their phones to actually call people and fans, are eagerly awaiting the release of Half Life 2: Episode Three. It’s a crazy time. But maybe most important of all, it’s the year of the last installment in the Advance War series. Okay, so maybe it isn’t the most important, but for some I’m sure it’s on the list. Whilst developer Intelligent Systems continues to release turn-based strategy games in the form of the highly popular Fire Emblem series, it seems that Advance Wars, with its more modern military themes and setting, has been left to rust. So maybe it’s time for someone else to take up the mantle.

Japanese developer Area 35 attempted to do just that by stepping in to fill the gap back in 2017 with the release of its debut title, Tiny Metal, which opened to fairly average responses. This year it returns with Tiny Metal: Full Metal Rumble. Despite the lack of any digits in the title, this is no re-release or updated version with additional features. Full Metal Rumble is a fully-fledged sequel with a new story and plenty of tweaks and improvements, following both fan and critic feedback, which sees it comfortably sit above the original as a true successor.

The campaign follows Commander Wolfram as she searches with her mercenary army for her missing brother although you’ll have the opportunity to play as multiple characters whose paths intersect as you confront the army of Dinolda through 39 missions. Between each of these you’ll find yourself in a small open world where you can select which mission to jump into or explore. There’s not a great deal of activity here as you’ll typically just move from one mission to the next, however if you choose to explore you can find treasures scattered around which unlock music or funds to purchase items from the in-game shop. There’s no requirement to traverse the map and all the collectibles can be obtained fairly quickly, but it’s a nice little feature which gives you an idea of the scale and layout of the world you are fighting in. 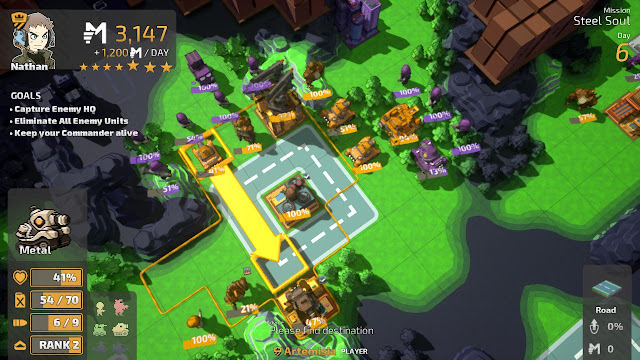 The story is delivered through short exchanges between characters at the start of each mission and whilst the story has its fair share of intrigue with twists and turns throughout, the cutscenes are somewhat lacklustre as they converse against a still image in the background with very limited animations and voice acting which leaves a lot to be desired. As a result, it’s not particularly engaging however the characters are rather charming and I grew to love them as I made my way through the campaign. These scenes rarely last any longer than a minute or two before you are thrown into classic turn-based tactical warfare where Tiny Metal: Full Metal Rumble really shines.

Your objectives vary from capturing an enemy headquarters, surviving a number of turns, defeating a key enemy or even just killing as many enemies as you can. Each mission also has its own set of optional challenges to really push you by limiting what actions you can take or which units you can build if you want an extra layer of difficulty. You start with a few units which can range from infantry style troops to vehicles like APCs, tanks or walking bi-pedal mechs and even aerial units including flying fortresses, all displayed with cute visuals. Every unit feels balanced and has its own unique purpose with strengths and weaknesses to consider when building to counter the enemy and I never felt a unit type became redundant as each play their part to assist in driving the enemy back. Throughout the map are cities, airports and factories which infantry can capture resulting in more income per turn or spawn locations. This leads to some great tactical gameplay and strategic thinking as you attempt to capture neutral or enemy locations to bolster your army and force the enemy to fight on two fronts, rather than trying to beeline it straight to your objective.

As well as careful consideration for unit placement, there are a number of other tactical elements you’ll need to balance. The Focus Fire ability allows multiple units to concentrate fire and take out an enemy in one fell swoop but leaves you open to retaliation if you aren’t evenly dishing out your attacks. Assault allows you to attack the enemy and push them back from their current position which can be vital to prevent enemy captures with the caveat that the enemy attacks first. Vehicles and aircraft now require fuel and ammo which adds a great amount of depth to your tactical thinking, and many times I found myself teetering on the brink of defeat weighing up the pros and cons of launching a last-ditch effort or pulling back to replenish. 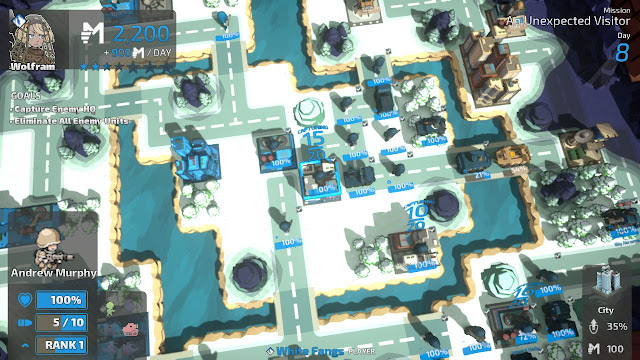 As well as strategic locations to capture, comms links allow you to deploy hero units, who are generally much more equipped to handling tough situations, for backup and can easily add a much-needed advantage if required. These can even be called in to support units struggling on the other end of the map and push you to storm in one direction to support the other. Each commander has their own set of passive abilities such as reduced costs or increased unit movement but their active abilities can be the real turning point, allowing you to increase attack power or defences for every unit type specified to turn the tide of battle in your favour. Choosing when to use such a power can be critical, activating to increase power for mechs may sound good but be rendered useless if you have none on the battlefield or those which are on the verge of death. Overall there is enough depth and variation in how any situation can be approached and the combat never becomes stale with every battle feeling important as the next and incredibly satisfying.

This isn’t to say that Tiny Metal: Full Metal Rumble is without its flaws. Each attack carried out plays a short cutscene of the units in action which can be enjoyable at first but quickly become repetitive, especially during Focus Fire as it jumps between every unit involved. Unfortunately, these are also plagued by the same lack of creativity as some of the story driven scenes and once you’ve seen a unit attack, you’ve seen them all attack, with no real change in animation depending on who or what you are attacking. Thankfully the option for these can be changed in the settings to quick or even switched off if you find them to become tedious or time consuming. Unlike its predecessor you’ll find Multiplayer available from the start rather than via an update month’s down the line, but sadly games are few and far between with a seemingly non-existent player base. I had also hoped that Tiny Metal would make use of the Switch’s touch screen to allow movement of units or the map with ease but unfortunately this feature was absent. Whilst not a flaw, this is definitely a missed opportunity to bring tactics to your fingertips with the handheld mode.

Although there is definitely room to grow in terms of story and how its presented, as well as a few minor flaws here and there, Tiny Metal: Full Metal Rumble provides a huge amount of enjoyment from start to finish with some incredibly tense fights. Its gameplay provides a great balance between fun and challenging which made me fall in love with the genre all over again. I found myself approaching missions like a game of chess, trying to predict the enemies next move, what unit they will build, which location they will try to capture and so on. Every move is important and needs to be carefully considered which is exactly how a game in this genre should play, but most importantly, feel. Advance Wars may have fallen into the archives of history and left some rather big shoes to fill however Tiny Metal: Full Metal Rumble exceeded my expectations in every way and comes the closest we have ever seen to another release whilst standing firmly on its own two feet unashamedly its own entity.