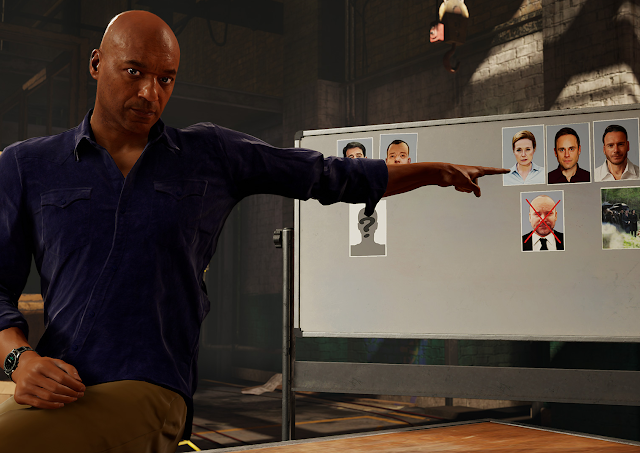 Is the “AAA” of virtual reality really to be found in glorified light gun games? Is the pinnacle of this medium really to be a throwback to those days in the arcade where kids crowded around SEGA’s The House of the Dead cabinets because of the big “R18+” curtains that were hung around them? Blood & Truth would like you to think so. This isn’t necessarily a criticism, because I was one of those kids clamouring for a peek into the decrepit catacombs filled with zombies. At the same time, VR has promised so much and, looking at the output of these “AAA” studios, it would seem that the technology’s closer to enabling a step backwards than it is a step forwards.

Blood & Truth weaves a pretty compelling narrative, in its very television way. You play as a Tough Dude™, a former soldier who is called back home after his father passes away. Before his grave has even been filled in, a rival decides to march on in and take over the family business. Yep, you guessed it. You’re part of a family of mafia-types, and while the family insists that you stay out of it all, because you’re a soldier and therefore a hero, you know what you’ve got to do; be the hero.

In extracting revenge and liberating your family, you flit from mission to mission, shooting goons and blowing up stuff. VR developers have decided that free movement doesn’t really work for the format (fair call, that), so instead you move from “node” to “node” within an environment by physically looking at the point you want to move to next. Most of those points are behind some kind of concealment (for combat sequences), or a point of interest (for “exploration” moments), so the game moves along at a snappy pace. It’s just as well that it does that too, else you’d realise that underneath all that energy is a pretty shallow experience. Thankfully it does have the pyrotechnics do carry it by giving you an endless parade of raw excitement. 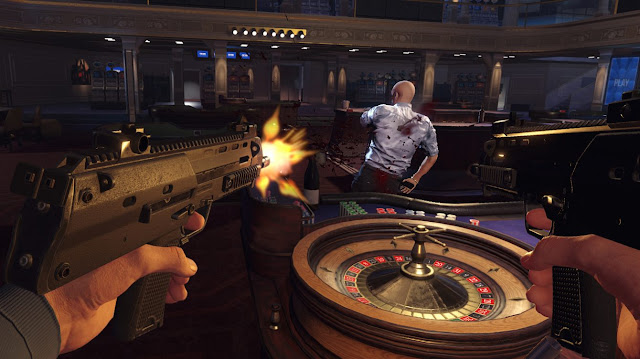 Gunplay is nice and clean, and you’re in for a good challenge if you decide to play with the laser sight off. Blood & Truth’s best moments in combat are where the slow motion kicks in, and you need to incapacitate an enemy by aiming for specific points on his body. It’s noting we haven’t seen done before, but the cinematic quality that the VR lends the action helps make this feel exciting and visceral enough.

Speaking of cinematics, Blood & Truth’s greatest strength is that the environments that you wander around could easily belong to a new James Bond film, if you weren’t being constantly reminded that you’re actually a thug lacking the class to be employed by Her Majesty’s Secret Service. There’s the same use of decadence as a visual motif through the entire experience that gives Blood & Truth a sense of the exotic. One of my biggest issues with modern shooters is that I don’t find the locations or set pieces particularly memorable. The industry has settled into such as comfortable rhythm with these things that, when a game comes along that does challenge things, I tend to pay attention, even if the game itself isn’t all that.

Blood & Truth is the much better game, which is a nice win from the outset. Mechanically it works, and shows that developers are starting to grasp the complexities of development in VR. The fact that the team managed to include finicky activities like lock picking and ladder climbing without making me want to hurl my controllers through a wall in real life is testament to that. But it’s the settings and set pieces that really kept me playing. After shooting up a horde of baddies while standing at a DJ’s deck in a nightclub, running through five-star hotels painting the carpet red, and even just admiring the affluent view of London from my family’s home, the team at London Studio need to be complemented for their mastery of set design. 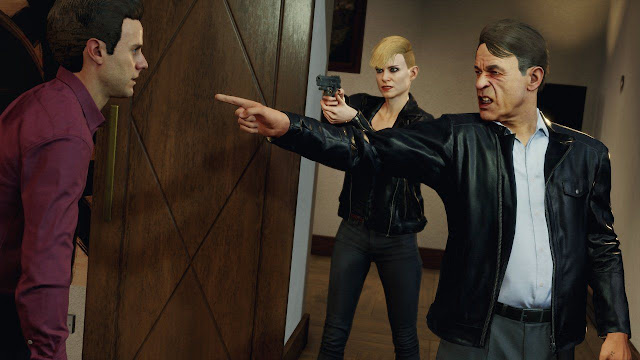 Though the narrative is as safe and predictable as you could expect, it’s nonetheless presented nicely. There’s a good use of flashback technique, as you’re frequently brought forward in time to an interrogation that you’re going through on the events that the game depicts. The interplay between your character, and that of your interrogator (played by a brilliantly photo-realistic Colin Salmon), is snappy and biting – the kinds of scenes that you might expect a Guy Ritchie or Quentin Tarantino in their prime to take on (not quite as good as that, mind, but a genuine attempt). Going further, that framing technique actually works to the game design thematics – it’s so hyper-linear because you’re recounting events, and of course there’s only one path through the past. I don’t for a second believe the developers actually thought along those lines when developing the game, but as a happy coincidence it works, and it does strengthen the overall cohesion of Blood & Truth.

Performances overall are quite strong, given the limited material that’s often available to them. Blood & Truth is quite the slick production, and in that regard it’s certainly more than we usually get from rails shooters. House of the Dead didn’t exactly try to do the narrative thing until Uwe Boll gave a film a crack… and as we then found out, House of the Dead was better off without the narrative thing. With the VR goggles on, Blood & Truth is quite the immersive experience, though there’s a lack of sense of your character’s physical presence in the world, which is a little disorientating. Characters will get right in your face before you shoot them, and if enemies fire in your direction long enough eventually you’ll get the “game over” sequence, but it becomes very noticeable that no one actually touches you… and you can’t touch them either.

VR as a technology has an issue there. Either characters do interact with you physically and it feels artificial because you can’t feel anything, or characters don’t interact with you physically and the artificiality comes from the realisation that you’re actually quite distant from the events, even though they’re happening right in front of you. There might not be any solution to this until someone finally figures out haptics to go with the VR, but for now I think I find it easier to suspect disbelief when I can fake-interact with characters than when I cannot, so in this regard Blood & Truth zagged when it should have zigged. 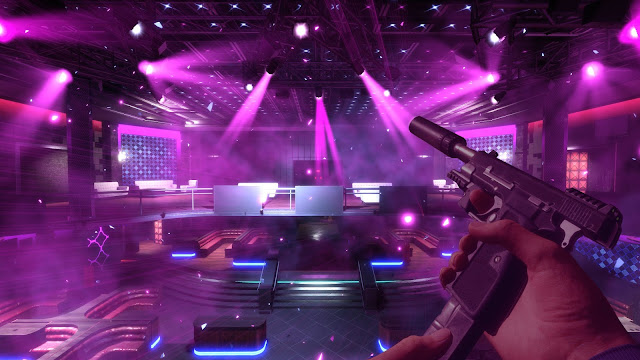 That’s a minor complaint, though. Blood & Truth is on balance a very enjoyable, highly entertaining game, and this has the best chance that Sony has had yet to sell VR on the “AAA” community. Is it delivering on the promise of VR, though? To go back to my earlier point, lightgun games are hardly an evolutionary step forward for shooters, and while Blood & Truth dresses it up well with some incidental activities and strong television-format drama, it is at core a lightgun game.

When I bought into VR, I was buying into a promise that the technology would deliver new experiences. Experiences that wouldn’t be possible through standard play. PlayStation VR has given me plenty of examples of that. FromSoftware’s Déraciné wouldn’t be what it is without the VR. Nor would the Summer Lesson series. Blood & Truth, however, lacks an experimental spirit. There’s nothing inherently wrong with that, but it’s too easy to look at this, look at what conventional games achieve unburdened by VR, and still think that these “AAA”-minded developers are struggling with the limitations of the platform.