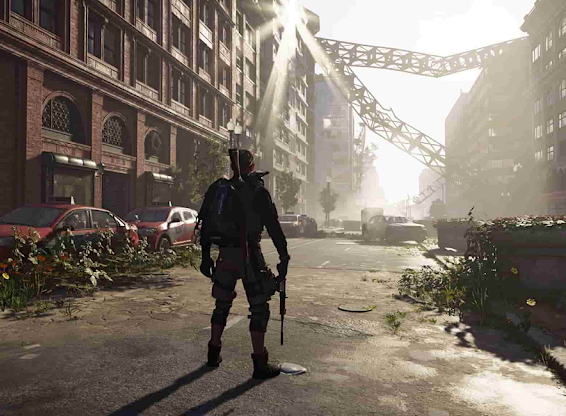 The original Division had some cool ideas, but it the eyes of many it got off to a rocky start between its issues and a perceived lack of content. That game received a lot of love from Ubisoft though, and continued to see quality of life improvements and additional things to do that slowly developed it into a game that had a highly committed community. Tom Clancy’s The Division 2 took those lessons learned and has produced a sequel that is better in every way.

There’s a natural urge to compare The Division 2 to the recently-released Anthem, as they are both shooters with a loot-heavy emphasis made by two large studios. However, the comparisons should probably end there, as they don’t favour Anthem at all. Another comparison you might want to draw is with Bethesda’s Fallout 76, as these are both apocalyptic scenarios with persistent online worlds… but that comparison shows Ubisoft’s experience with the platform the second time around, because The Division 2 is comes out on top there, too. Right out of the gates, the experience with The Division 2 is technically sound and refined. I experienced a couple of lesser hiccups, like the need to restart missions on the rare occasion, but not very often. This should probably be a baseline and not something to celebrate, but given how many talented studios manage to mess the foundations of these online games, that The Division 2 is so playable is a big tick to its name.

With that out of the way, there’s something I need to mention, which has always made reviewing these kinds of games a challenge – I am reviewing The Division 2 knowing that this game will change over the coming years. Many of these titles are not even close to being the same game they released as with a couple of years under their belts. I cannot predict how The Division 2 will look in eighteen months, but what is here now is excellent. 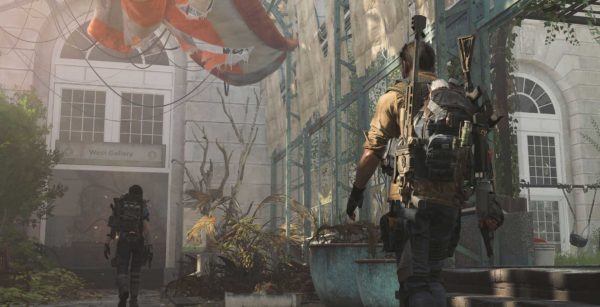 Taking place several months after the original Division, this title takes place in a reconstructed Washington DC that is visually impressive for multiple reasons. Given that this is a story of how humanity has fallen apart at the seams due to the spread of a deadly virus, the state of deterioration shows up not just in the violence that the human race perpetuates upon itself, but in the streets and buildings all around as well. The very start of the game starts you off in a forested area that is beautiful, but quickly transitions into something far dirtier and grimier. At one point a deer is running along, but moments later you see some armed men kicking someone else to death. Trees are soon replaced by cars and vans that look like they have not been started in ages. The rustling of leaves is shortly thereafter swapped out for rustling pieces of paper floating through the air on a strong breeze.

From a world building perspective, all of this is assisted by well-crafted missions. In a game of this nature, where MMO elements are baked in, it can be difficult to construct a cohesive story. Truth be told, most of the characters in The Division 2 are lacklustre. Your own character can be customised in a variety of ways visually, but the protagonist is of the silent variety, adding little texture to the one-sided conversations that take place. Characterisation is an aspect of The Division 2 that feels the weakest, so it’s just as well that so much of the game’s best material comes not from the characters themselves, but the missions and environments. Museums and monuments serve as the backdrop to many of the game’s missions, providing a lot of interesting opportunities for primary and side missions. While most of the characters are not overly expressive, some of the creepier zones and audio logs picked up along the way give the settings an additional sense of humanity – or that at least people did at one time exist in these spaces. You’re also encouraged to spend time simple exploring the environments, not just because they are so impressively designed, but also because there are often times quality loot to be found. I like that these little carrots help encourage me to explore more of the world.

The majority of my time spent with The Division 2 boiled down to either exploration or combat. The combat is an area where The Division 2 is significantly improved. The original Division was roasted for its ridiculously spongy enemies, and while some enemies – and bosses in particular – can still be a challenge, improvements to the armour system and smarter enemy behaviour keeps things from getting as stale as in the first title. Bits of armour can be shot off, and the resulting opening provides stun opportunities that make make the combat about more than pouring a zillion shots into the chest of the same target over and over again. Also, enemies are a bit more prone to moving around, meaning there’s greater room for tactics in dealing with them. A gunfight might see an enemy slide out from behind cover and go prone, while another hides behind a barrier and shifts around a bit before popping up in a different spot. These are big improvements over the game of whack-a-mole usually played in coverage-based shooters, and help to give The Division 2 a better sense of vibrancy. 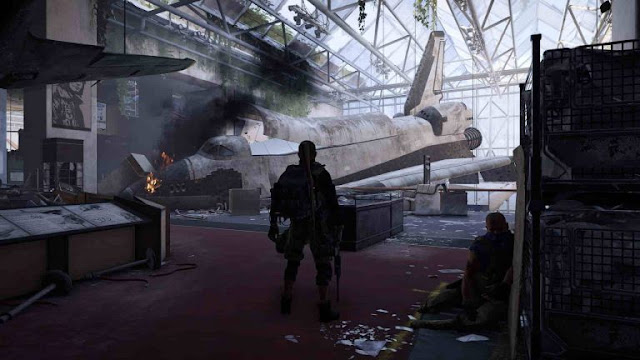 Looting has seen some quality of life improvements as well, as it is simply quicker and easier to do. Less time spent de-constructing gear and just picking up and going means you spend more time with the aforementioned exploration and combat. Not that there is a shortage of gear. The variety of weapons, the various types of perks and skills, experience earned and more all give The Division 2 some welcome RPG elements that serve as the primary progression hook outside of new quests. It helps that like most Ubisoft games (and unlike The Division at launch), there is a lot to do as well. Join up with other players to take on challenging fights or respond to their distress signals to make use of the connected elements and give the world a bit more life than what you see out of a single player-focused title like Far Cry. Still, if you do not wish to make use of those features, The Division 2 does a nice job of scaling difficulty for those who prefer to take things on by themselves.

I will say that I wish that Tom Clancy’s The Division 2 had more to say. The thin story is not helped much by its characters and stands in sharp contrast to the intriguing setting and mission development. These tasks certainly provide more interest than the simple fetch-quests found in most games, and it is interesting that mission characters are often more interesting than those who help propel the primary storyline forward. Despite this concern however, just about everything else The Division 2 does is fantastic, and I have found myself logging back into it over and over again as I further explore what the game has to offer.

Video: Why Darksiders is a genuine classic