I first played Her Story (my review here) years ago upon its release (2015, practically a lifetime ago), and in that time I have not stopped raving about it as being one of my favourite mobile titles (iPad) of all time. I’ve been waiting patiently for any more news regarding the game’s spiritual successor, Telling Lies, but creator Sam Barlow has been quite tight-lipped about it. 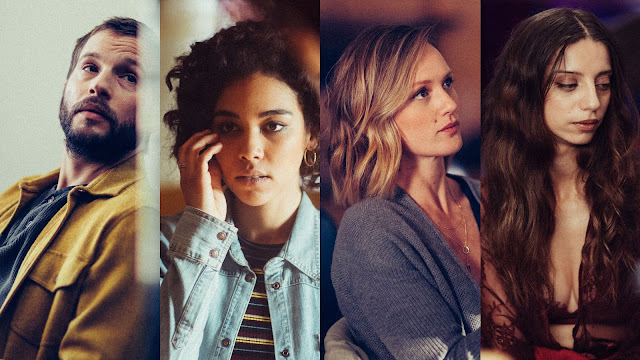 But finally, there’s news, and it’s big! The main cast for the FMV game has been revealed, and it includes some familiar faces. The character of David will be portrayed by Logan Marshall-Green (The Invitation, Spider-Man: Homecoming). Ava will be portrayed by Alexandra Shipp (X-Men: Apocalypse; Love, Simon). Emma will be portrayed by Kerry Bishé (The Romanoffs, Halt and Catch Fire). Max will be portrayed by Angela Sarafyan (The Immigrant, Westworld). Child actor Vivien Lyra Blair, recently revered for her roll as “Girl” in Birdbox, has a speaking roll in the game, although those details remain a mystery… for now.

There is currently no release date set for Telling Lies, but prepare for it by reading my interview with Sam Barlow post-Her Story launch.

For those of us in the Northern Hemisphere, February can be particularly chilly. You’d think the last think you’d want to do during the frozen winter months is play a game set in a frozen world, but Fimbul makes the frostbite worth it. The action-adventure title is set during Fimbulwinter, the prelude to Ragnarök. Take a look at the latest trailer:

Elder berserker Kveldulver died courtesy of bandits, the the goddesses of fate don’t want him dead; instead, they resurrect him to be sent on a quest to destroy the Jotun giants and prevent the apocalypse.

Fimbul will be available on February 28, digitally and physically, for PC, Nintendo Switch, PlayStation 4, and Xbox One. It’s developed by Zaxis Games. Originally, we expected to see the title last November, so I’m sure the developers have taken some extra care for this one.

Find work as a ghost exterminator in Dead End Job

Hector Plasm has just taken on a job at Ghoul-Be-Gone, experts in paranormal pest control. It’s too bad he’s being haunted by the ghost of his mentor. Here’s a trailer:

The game is a procedurally-generated twin-stick shooter made for couch co-op. The most ghosts you trap, the more the client will pay you at the end of each job. Simultaneously, you’re trying to free the soul of your mentor before she turns into a spook for good,

Dead End Job is expected in the second quarter of this year. It’s developed by Ant Workshop out of Scotland, and developed by Headup Games.

Salt and Sanctuary coming to Xbox One

Currently, Salt and Sanctuary has been downloaded a whopping 900,000 times… but what about those of us without a Switch? Will we get a turn? The answer: Xbox One owners will!

In the game, a shipwreck leaves the protagonist washed ashore in a strange land where an old man dubs them Saltborn. Terrible enemies are everywhere in this new, horrific place; in fact, each new area has another monster guarding it. Saltborn can up their skills via a massive skill tree.

Developed by Ska Studios, Salt and Sanctuary will be released for the Xbox One on February 6.

Tales of Vesperia: The Art of the Joyful Deconstruction