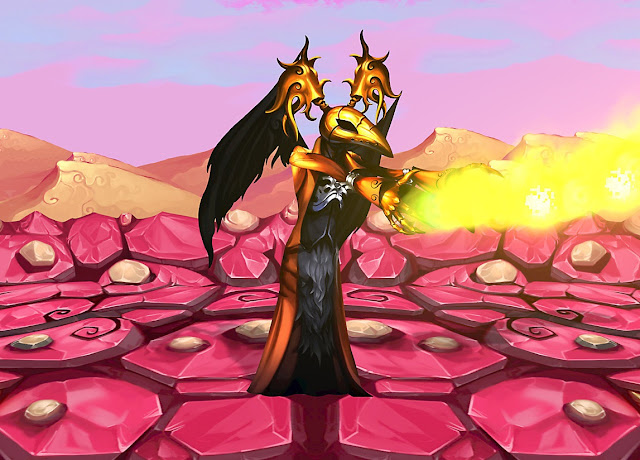 Mecho Wars: Desert Ashes comes to us from the same developer that was behind Plague Road, and while those two are vastly different games (Plague Road was a tactical roguelike, Mecho Wars is an Advance Wars-like tactics game), they share a commonality; they’re gorgeous, visually imaginative and vibrant games that leave a great impression. Unfortunately, it doesn’t take long for that shine to warn off, because these games also come across as quite vapid.

Mecho Wars takes the cute, chibi war setting of Advance Wars, and replaces it with stuff that looks essentially like a Lovecraft or Junji Ito horror aesthetic crossed with Todd McFarlane, Looney Tunes, and a half dozen other comic influences. The game’s dragons, war dolphins, skeleton warriors and weirder are all drawn with the most impeccable eye for detail. When units go to battle with one another, the character models also completely fill the screen, and are animated absolutely beautifully. The creative behind Arcade Distillery, Luc Bernard, is clearly an artistic talent, and deserves plenty of respect for the energy and vibrancy that he infuses into his work.

Unfortunately, he’s not an storyteller on any level, and the rest of his team haven’t been able to fill in there. Each level in Mecho Wars is introduced with a brief dialogue exchange between the leaders of the respective sides, but this doesn’t amount to much more than “they’re attacking! Stop them!” or “now it’s time for us to attack”. The campaign is structured as a sequence of contained missions, with the only meaningful thing linking them together being the visually distinctive sides arrayed against one another. Those levels are also entirely arbitrary in design, and look (and play) just like any Advance Wars level that you remember.

Advance Wars itself didn’t exactly deliver a narrative that would make Shakespeare proud, but then Advance Wars was grounded in some kind of reality. Forces were soldiers with guns and cute little tanks. It was easy to contextualise as a cute military strategy game, in other words, so the design, setting, and ideas of those games was immediately familiar. But Mecho Wars is a flight of fantasy (or feverish nightmare) quite unlike anything else out there. For Mecho Wars, I needed to know more about these units and characters. Their designs are so incredibly distinctive that I felt like I was being seriously shortchanged that I wasn’t being given a vision of their cultures and the world that they inhabit.

Over time it’s really hard to shake the feeling that Mecho Wars is shallow. It’s not, mechanically and visually, and it doesn’t really deserve that impression, but there’s a big, gaping, hole in the completely undeveloped narrative that sours so much of the other great work that the developer has done done. My sincere suggestion to Bernard is, for future projects, to collaborate with storytellers that can match his artistic vision. That’ll be incredibly difficult because his vision is so distinctive, but his art is going largely to waste with these projects.

Mechanically, Mecho Wars offers a very template Advance Wars experience, which that’s nothing to sniff at, but it bears mentioning that it doesn’t do anything to break out of its box. Units are broken down into four types; infantry, artillery, airborne and aquatic. Each of those four types utterly dominates one other type, and is completely ineffective against another. Within each category there are cheap, mid-range, and expensive units, which obviously scale in power (and attack range), but you need to be careful with the really powerful stuff; if those precious, expensive units are isolated against something they’re weak against, that’s a big investment that’s wiped off the map in a single attack. 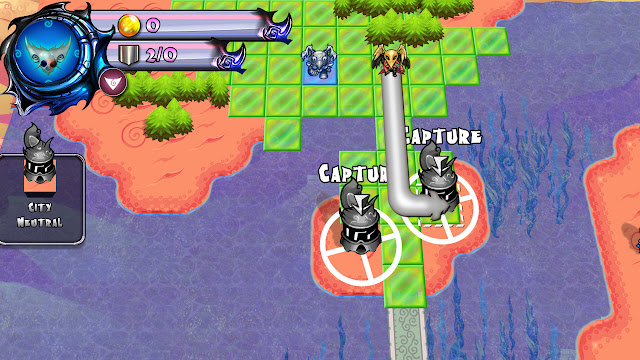 Levels are carefully balanced to give each side a couple of turns to establish a defensive line before the fighting breaks out, and from there the strategy is to slowly push on, buying units to send into the meat grinder in the hope of rolling forward just enough that your units can capture a building or two and slowly push the enemy line back. Mecho Wars’ strategy is almost entirely built around wars of attrition, with little leeway to push for alternate paths to victory. There aren’t support units, there’s no rules around supply and morale, and the only thing stopping you from being able to simply roll over everything by building the most powerful units is their cost, and the fact that every unit falls down so quickly to whatever category of unit it’s weak against.

To succeed at Mecho Wars, you need to keep an eye out for what units your opponent is building, and then build the right unit to counter that, before using whatever resources you have left to build a couple of additional units to give you a power advantage. It means that at times – especially on the later levels – combat becomes what feels like an endless to-and-fro grind, and it can be frustrating to not really have a solution to that other than to build more units, but on the flip side this game certainly can’t be accused of being poorly balanced or easy to exploit your way through – the balancing is supreme.

AI for this kind of strategy is also relatively easy to program, and Mecho Wars’ AI does a good job of behaving like a human player should. It’ll build a variety of units, and know which units on your side it needs to pick on. Later on in the game you’ll start to acquire perks, which adjust the behaviour of your units slightly, and the AI does struggle to counter that, but that aside, it’s still going to take you plenty of time to work through what this game offers. 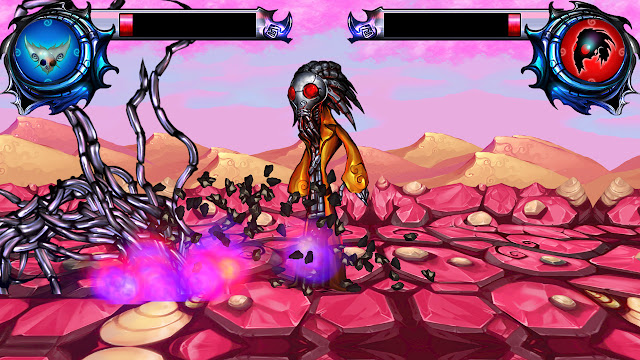 Nintendo and Intelligent Systems might have but Advance Wars on ice (because Fire Emblem is so much more commercially effective), but there’s plenty of alternatives being made by indies that are keen to fill that particular void on the Nintendo Switch. A couple of years ago we have Tiny Metal, and now we have Mecho Wars. Tiny Metal is the more complex tactics game, while Mecho Wars is accessible, doesn’t requite too much deep thinking, and looks absolutely gorgeous. If you can push past the sense that Luc Bernard’s art deserves to be associated with something that is so much more, this game is a great filler in between whatever else you’re playing on the Switch.

On Thea: the strategy/RPG indie gem no one should miss

The Stillness of the Wind looks like an artistic Harvest Moon