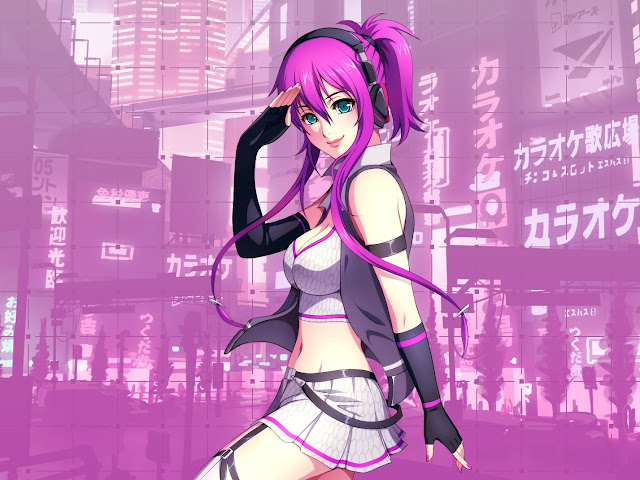 Akihabara – Feel the Rhythm Remixed would have been so much more impressive if it came earlier in the year. Given that we’ve had both Lumines Remastered and Tetris Effect released this year, it’s been such a stand-out good time for puzzlers that blend in rhythmical elements. Akihabara is a perfectly adequate example of the genre in its own right, but competing against those other two is almost unfair, given how good they are.

Related reading: Our review of the game’s original release on mobile

On the Nintendo Switch, the biggest problem with Akihabara from the outset is the design of the play field. Akihabara was originally designed as a mobile game, and played with a portrait orientation. This means the play field is thin and tall, which works fine in the context of a mobile title, but on the Nintendo Switch, it feels constrained and limited, especially when compared to the way Lumines on the very same console completely fills the screen and gives you plenty of room to drop the blocks down. Because the play field feels limited and doesn’t give you much room to manoeuvre blocks, Akihabara immediately feels like the more limited, almost claustrophobic experience.

In terms of how the game actually works, Akihabara plays very similarly to Lumines. Blocks fall from the top of the screen, and you need to join at least four of the same types of blocks together in order to then be able to clear them from the play field (and earn some points). Just like in Lumines, blocks need to be cleared away in time with the rhythm of the background music. A little beat marker passes from left to right across the bottom of the screen, moving in time with the music, and as the line passes the linked together blocks, they can then be cleared for points. Just like in Lumines, too, if the blocks get to the top of the screen, it’s game over. 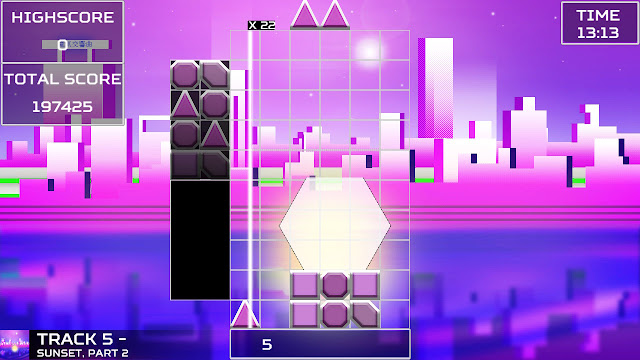 The one real point of difference is that in Akihabara, you need to manually activate the block clearing mechanic. It’s a simple button press when the beat marker is in the right position, but you get rated from “perfect” to “bad” based on how close to the beat of the music you activate the block clearing action and that simple activity does do a lot to give Akihabara its own identity. Suddenly, because blocks aren’t immediately cleared when they’re linked together, you can take risks and be strategic, nearly filling the entire screen in order to set up long chains and big combos of rhythmic block removal. You do need to have a better and more direct sense of rhythm too, as getting the best scores means you need those “perfect” timing ratings.

The direct rhythm game action does add a lot to Akihabara. It’s a little frustrating at first to figure out exactly how that timing matches up with the visual of the beat marker, but with a bit of practice there’s a great sense of satisfaction in getting into the groove. Where Lumines and Tetris Effect are much more about being mesmerised and meditative in being immersed into the colours and soundtracks, Akihabara is more participatory, and it’s an interesting shift.

Unfortunately, Akihabara can also get a bit fiddly, as the blocks don’t stop dropping as you’re clearing away the ones that you’ve matched up on the play field. This comes across a little like trying to play that old game where you rub your stomach in a circular motion, while patting your head with your other hand. Some people can do it naturally, and others can achieve it with some practice. But for another group, it can feel like your attention is being pulled in a couple of different directions at once, and that can be downright frustrating. 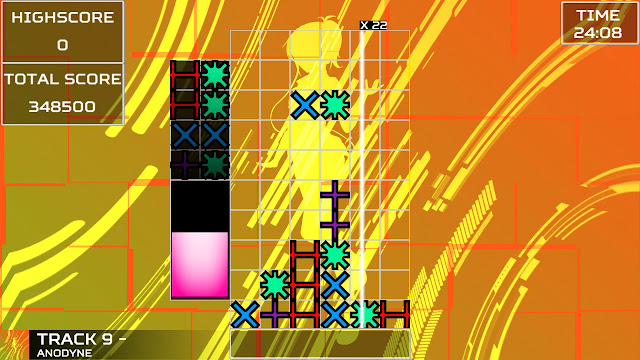 The other thing that lets Akihabara down is that it comes across as rather uninspired in what it allows you to do with it. There’s only really two ways to play. The first is the “marathon” main play mode, which links a bunch of different music tracks together, and gets you to play through them all in order to get a combined score at the end. Alternatively, it’s possible to unlock individual tracks to play on, and try to get a top score on just that single track. The marathons either runs for 15 or 30 minutes at a time, depending on how many tracks they have. For a puzzle game designed around quick pick up and play, 30 minute play sessions with no way to put the game down and come back to it is asking a lot.

On the other hand, once you set aside the time and get stuck into Akihabara, the presentation is of such a high standard that the time will fly on by. Every music track is vibrant, offers a strong beat, and fits nicely with the “electric town” vibe, which is where the title “Akihabara” comes from. I know that these days the real-world city of Akihabara in Japan is seen as the Mecca to anime and fanservice. Feel the Rhythm is not either of these things, which might confuse some people, but historically the city was the place to go to get musical instruments, and then electronics, and Feel the Rhythm’s fusion of lounge, club, jazz, J-Pop with electronica is brilliantly fitting.

Visually vibrant, and with a superb, deep range of music, Akihabara – Feel the Rhythm Remixed is one of the better ports from mobile to console. It’s just unfortunate for the game that 2018 threw up both a brilliant entry in the Lumines series, as well as the majestic Tetris Effect. A year ago Akihabara would have come across as something vibrant and fresh. As it stands now, it instead looks and plays like a lesser homage to its peers.