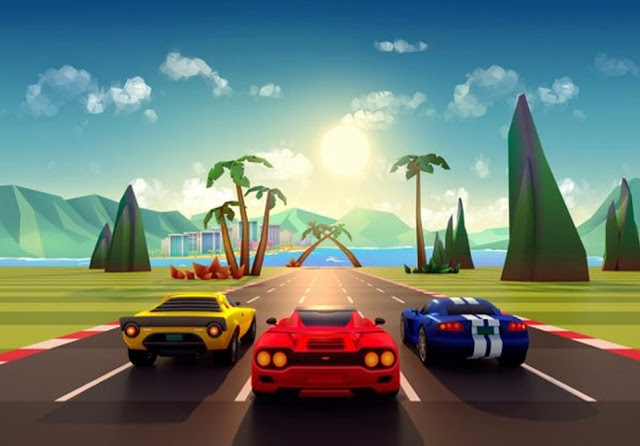 Out Run is an arcade classic that many of us have fond memories of drowning coin after coin into, playing as kids, so it’s not surprising that an indie developer would be inspired by the game when creating their own arcade speedfest. Sadly, the nature of arcade games also means that they’re very shallow… and Horizon Chase Turbo somehow manages to take a further step back from even there.

The appeal of Out Run, and the entire reason that it became an incredible magnet for coins, was the time limit. In Out Run, you had a timer that would tick down as you raced. A collision with another driver would slow you down – and boy was that painful, because while the car took no damage, watching the timer tick ever closer towards zero while you tried to get your car to speed up again was just the most intense, “hands are getting all sweaty” experience.

Horizon Chase Turbo plays a lot like you’d expect of a modern Out Run. There’s no need to worry about the brake button, and navigating through curves and opposition drivers is really a case of having the twitch reflexes to respond quickly enough. Just like in Out Run, if you hit another car (or go off road and hit a sign), there’s no damage done to the car, but you’ll lose a lot of time as the car spins out and then has to accelerate again.

Oh dear I don’t like this at all #NintendoSwitch pic.twitter.com/j8QtHv6AcU

Sadly, Horizon Chase Turbo’s biggest flaw is that it didn’t copy Out Run’s most “addictive” feature. Instead of a timer ticking down, races in Horizon are organised as you’d expect of a standard race; you need to finish a certain number of laps of a track. Tracks are small and races typically last for under two minutes at a time, and while you need to place highly to earn the points that you need to unlock further tracks and racing locations, at less that two minutes per replay, and no real penalty for failure, there’s just not the intensity that Out Run offers. All that you’ve got is a watered-down, twitch racer were a mistake can be rectified by hitting the “replay” option.

The developers seem to have recognised that the racing in itself isn’t satisfactory in the long run, so Horizon Chase Turbo includes a couple of features designed to get you to replay tracks in order to do better. On the track are a number of coins, and the goal is, naturally enough, to pick them all up within the handful of laps that you’ve got – it gives you extra points and allows you to properly “complete” a race. Harder tracks naturally tuck these coins away in sharper corners or less convenient locations, but without an adequate sense of reward from collecting these coins, it feels more like an arbitrary way to trick perfectionists into constantly replaying the game.

The other major feature is leaderboards for each and every race. Now, the leaderboards themselves are very good. They load fast, instantly show you how you compare with everyone on your friends list (which is a much more enjoyable leaderboard than the ridiculous times that the people on a global leaderboard set), and because tracks are only a couple of minutes long, time differences between yourself and the person in front of you are tiny. There’s always the sense that you can beat the time just ahead of you. 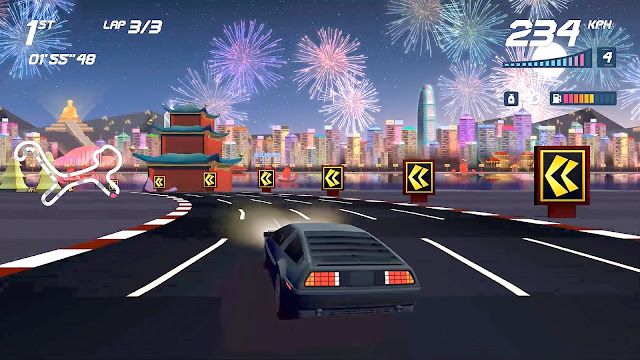 But this is let down by the track designs themselves, which are so bland and generic. Other racing games have the benefit of having proper, real-world tracks to race around, sure, but it’s one thing to be competing for a good time on the Brazilian F1 circuit or aiming for a top time at Bathurst. It’s quite another to try to be the world champion at “race 32, which is a square box with some tight turns.” If Horizon Chase Turbo’s racing engine required real skill and mastery, then it might still be worth persevering so you can prove that you’ve achieved something challenging. But all the leaderboards here reflect is the ability to be slightly better with twitch reactions than the other person.

At least it’s bright and colourful. Horizon Chase Turbo’s neatest feature of all is actually a subtle one, but it’s the way that it handles hills and corners. In the original Out Run, the most thrilling moments were coming up to a hill or a sequence of curves that you weren’t familiar with. Because of the way the graphical engine worked, you had the briefest moment to respond once cresting the hill or coming out of a curve before the next one would be on you. With practice the placement of what’s ahead becomes rote and muscle memory, but Horizon Chase Turbo does a similarly great job with its visual engine to make that first experience of a race feel frantic, and make you feel good when you absolutely nail a combination of complex curves and hills.

Horizon Chase Turbo does a good job of creating a sense of speed, and emulating the look and feel of Out Run. Where it falls down is in replacing the timer mechanics of Out Run, which made for a frustrating but ultimately exciting and tense arcade game, with a more typical racing track structure. It plays fine, but with none of the intensity, nor sense of reward, of the game it pulls almost all of its inspiration from.