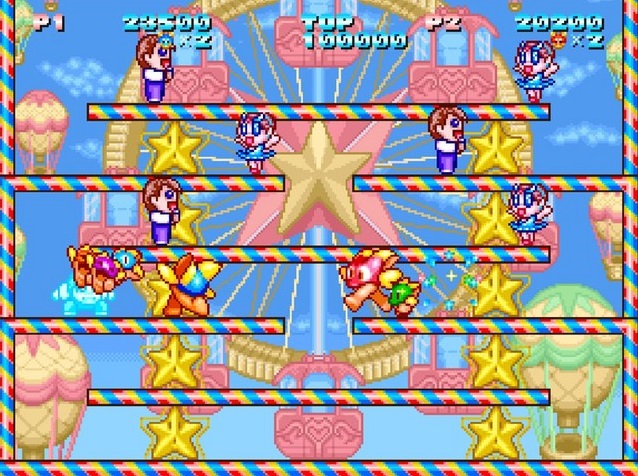 One can never have too many Bubble Bobble and Snow Bros. clones. The era of the single screen arcade platformer is long over, but every so often something happens to delight fans of this particular niche. Case-in-point: I never knew Zupapa existed. Then it was released on the Nintendo Switch, and I am delighted.

Zupapa is very much a clone of Snow Bros. You run around single screen stages, throwing things at enemies to incapacitate them, and then those enemies, once incapacitated, can be used as a weapon to take out more enemies, and generate high scores for you. In Snow Bros., you were throwing snowballs at the enemies, and after hitting them a few times, they’d become a giant snowball which you could then toss around the screen. In Zupapa, you collect up to four star shaped star people-like things that dance across the stage, and throw them at the enemy. One star-thing is enough to incapacitate the enemy, and then by touching him, you’ll defeat him, which then sends out a ring of stars that will destroy every other enemy that they touch.

If you have four star-buddies on a single enemy, and then cause him to explode, the ring of stars will be at its largest, so in Zupapa, the first goal of every stage is to collect all four allies, and then try to catch as many enemies in the ring at once as possible. 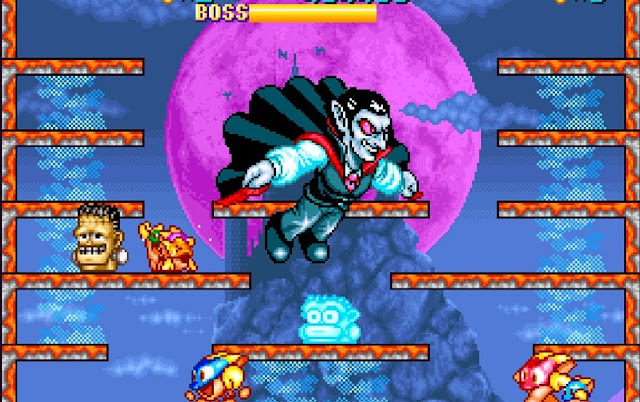 This is easier said than done though, because stages do tend to have a lot of enemies on them, and moving around the space can be tight. Zupapa is, after all, an arcade game, and it wouldn’t do to have such an experience be fair for the player, now, would it?

What makes Zupapa so appealing is how bright, colourful and energetic it is. Each level has its own background image, and they’re often hilarious, to go with the super-cute and charming enemy designs. The bosses are another thing entirely, and the developers really went all out to make those enemies whimsical in tone. The only unfortunate thing is that there’s so few of them. There’s only six worlds, as far as I can tell. You’re welcome to pick whatever world you’d like to start, and admittedly while I’ve seen all the levels and bosses I haven’t yet completed all six worlds in a single run, but I suspect that’s all there is to Zupapa. There’s only a couple of lead up levels to each boss, too. The true genre greats – Bubble Bobble and Snow Bros. – both feel significantly more substantial than Zupapa.

But in those games you effectively have unlimited ammunition. There’s a added layer of skill involved in Zupapa, because you do only have those four allies to utilise… and that’s assuming you can catch them all easily. More often, especially in later levels, you’ll be just trying to avoid getting hit while taking out one or two enemies where you can; you need to have a level of precision aiming and timing that is beyond what most of its brethren offer. 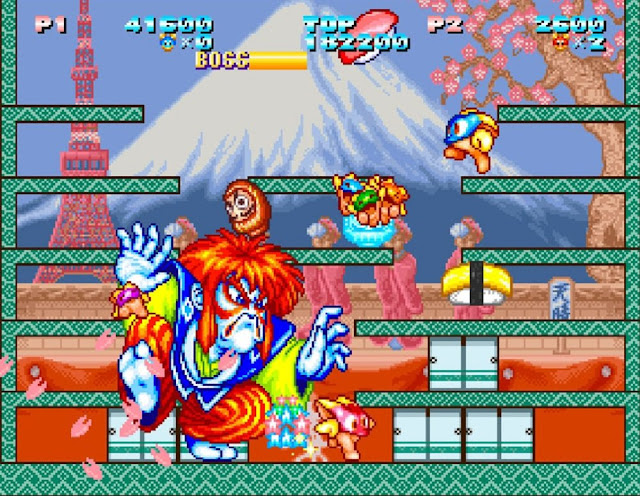 On the other hand, the very best scores require you to somehow reach a central enemy and explode him so that he takes out the maximum number of other enemies on the way. There has always been that element of risk vs reward in these kinds of games, but Zapapa somehow makes it more pronounced.

With all the lavish features of other SNK arcade ports to Nintendo Switch, Zupapa is one of the more distinctive and enjoyable that we’ve seen from this retro series for some time. It’s one of SNK’s lesser known classics, perhaps, but it’s so bright, charming, and oddball that it’s one you won’t quickly forget.

We need to stop defining “progress” in games as “better hardware”

Here’s the release date for FMV title The Shapeshifting Detective!