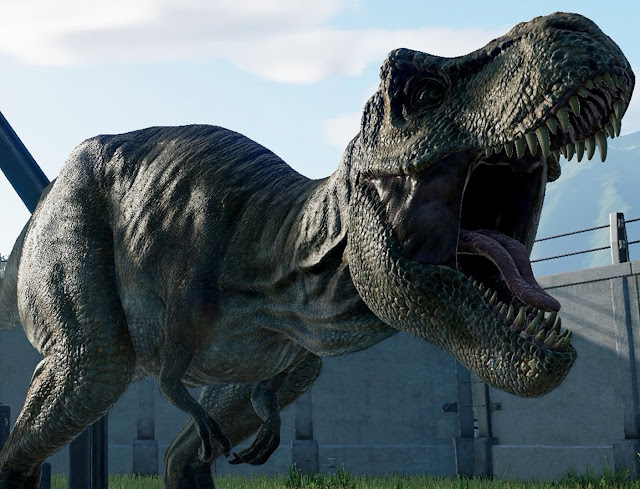 Games based on movies have been known to be some of the worst ever, and yet they keep making them… because who could turn down the kind of money involved in capitalising on a popular franchise? Here we have Jurassic World Evolution; a game all about doing what we’ve all dreamed about at some stage… building a dinosaur park!

You are put in control of islands of the Muertes archipelago – six islands that unlock as you progress through the game. The first island is, of course, a tutorial but after the first, each island comes with its own challenges. One might have lots of storms or be very small and hard to build on, one even has tornadoes that ripped through your park. Not cool when you’re trying to contain carnivores. You can also unlock Isla Nublar early on in the game and that island works as a sandbox level where you can do pretty much what you want with it, but to unlock more dinosaurs (and there are over 40), and buildings, you will need to progress through the other five islands first.

The main object of the game is to build a profitable and safe park but also to keep the three divisions of the park happy. They are the Entertainment, Science, and Security divisions. Ignore one for too long and they could sabotage your park. To keep a division you must complete contracts for them. Contracts can be anything from hatching enough dinosaurs to making so much profit. This is where the game runs into one of its main problems – the contracts get very repetitive over time. Completing contracts gives you money, and after getting a division’s happiness to a certain level you earn new dinosaurs or buildings to research. They also provide the main story missions of the game – each island has three main missions one for each of the divisions. 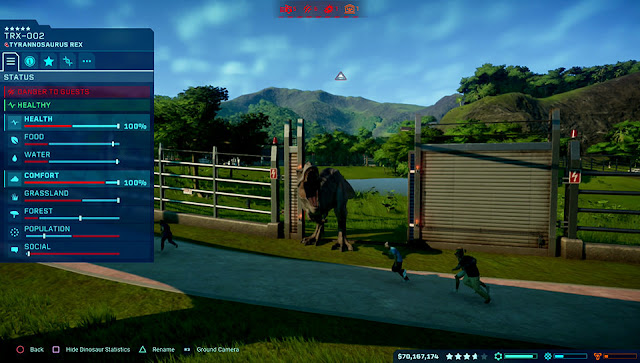 Each island also unlocks more dinosaurs, that you’ll need to send dig teams out to find. Once unlocked you can go back to any previous island and add them to that park. Acquiring fossils is an easy task. You must send out a dig team to different dig sites in the world. Once they return they will have fossils, amber (which gives you the most dinosaur DNA but is rare), and other things you can’t get DNA from but you can sell, which you can then use to finance future trips.

Extracting DNA costs yet more money, but eventually you’ll be able to start creating your new dinosaurs! In a neat touch, you can actually “make” a dinosaur having only extracted 50 per cent of its DNA… it just won’t live for as long. But sometimes you’ll just want to grow one ASAP. You can also research genome modifications that let you change parts of your dinosaur’s DNA, which will achieve everything from changing their skin color to making them more aggressive. Why anyone would add even more aggressive behavior to a T-Rex is beyond me, but hey the park visitors seem to like that stuff and who am I to deny them their dream experience?

And yes you can make the Indominus Rex and Indoraptor from the new movies. 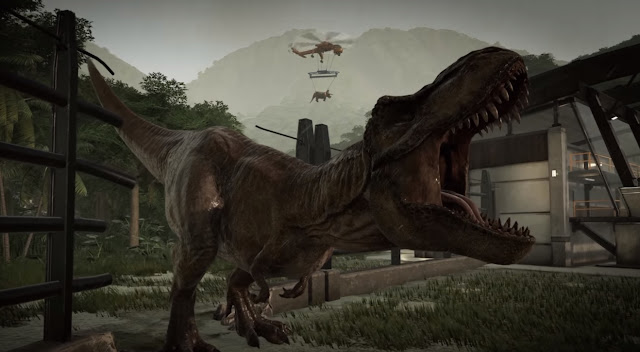 The more aggressive dinosaurs are hard to keep in their enclosures every time it storms it upsets them and they end up attacking the fences until they are free and go on a rampage. You can build shelters for the visitors in case something like this happens. The herbivores tend to just run around but can still attack or run over people. The carnivores don’t waste time; they attack and eat people. There’s nothing quite like it storming out while a T-Rex grabs a person and chows him down (hey, it’s their fault for actually coming to the park). It would have been nice if there was more variety in the grisly moments, but you take what you can get.

To run a successful park you need more than dinosaurs. You also need to build places for the visitors to eat, drink, shop, and have fun. You unlock shops and other things that can help make visitors happier like a bowling alley or arcade for fun, a gift shop or toy shop for shopping, a bar, and restaurants for food and drink. There is a little management to this if you want each shop lets you pick between three different products you can sell each one costing more to make but you can raise the price they pay for it. It’s not exactly Theme Park, but the simulation fans will enjoy the eye for detail anyway.

In terms of presentation, it looks the part, and the music seems to be from the movies including the famous theme song. The sound effects of are also great from the sounds the dinosaurs make to the sound of the wildlife and birds from the forests around all sounds amazing. The voice acting is also really good with Jeff Goldblum, Bryce Dallas Howard, and B. D. Wong all playing their movie counterparts. Too bad Owen Grady isn’t played by Chris Pratt, but hey, the joys of licensing. That said, I do have to wonder why Jeff Goldblum’s character, Ian Malcolm, is helping you run the park, given that the character itself doesn’t like the idea of anyone messing with dinosaur DNA and bringing back the dead. Surely the game developers were fans enough of Jurassic Park to know that. 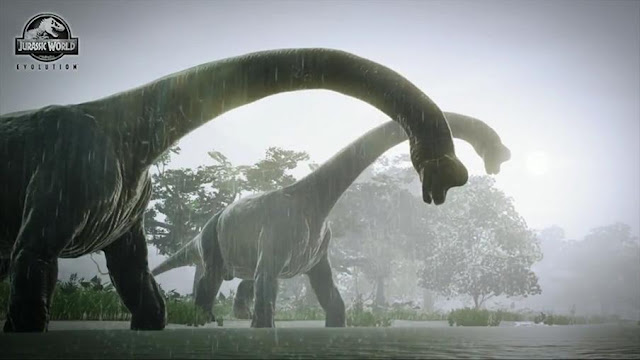 I must say I really enjoyed building and running my own Jurassic World park. It’s not perfect, and certainly given the heritage of the developer in theme park games we possibly could have expected a bit more from it, but you just never know what DLC and the ongoing development promised of the game might bring.