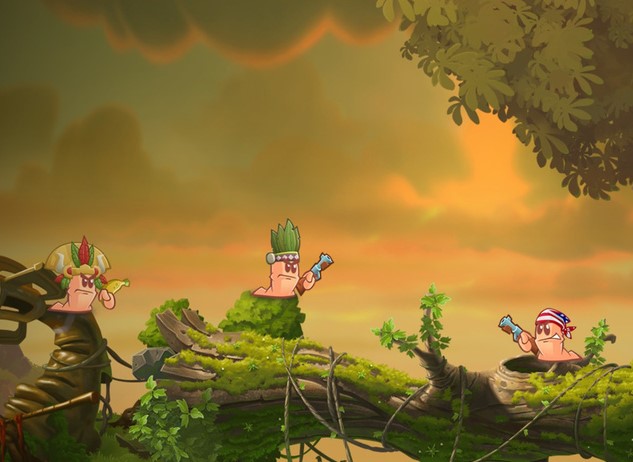 Worms is a very good game for this time of year, when there are going to be all kinds of multiplayer events going on with family and friends, and the Nintendo Switch is a good console for it, too. Team 17’s venerable series’ first outing on the Switch is wonderful title indeed, as a port of one of the better Worms games in recent years in Worms W.M.D.

Everyone knows what Worms is about by now, surely. The series has been around since 1995, after all, and I’d be surprised if anyone who plays games even relatively consistently hasn’t played one at some point. They’re turn based strategy games that take place on a 2D plane, where each player has a number of worms, each with access to a large arsenal of weaponry, and need to use those weapons to blow holes in the other side.

Worms is remembered fondly for a couple of critical things. Firstly, it’s downright funny. The weapons are incredibly over the top, and as a battle rages on, even more powerful and ridiculous weapons become available. If you’re not chuckling after the first time you toss a holy hand grenade at another worm only to see it sing “Hallelujah” before detonating to a scale that can only be described as the wrath of God, then you’re a sad, sad person indeed. 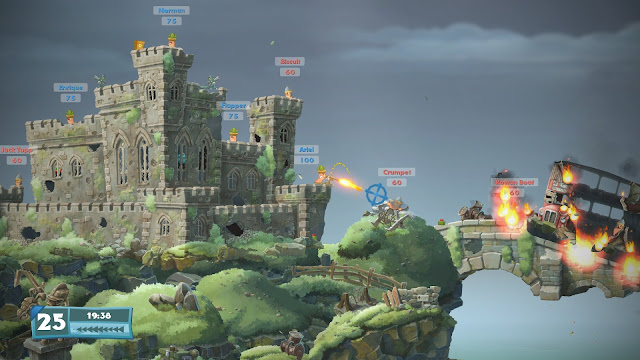 Over time that humour fades, of course, but the game does remain bright, charming, irreverent and silly. Which is why the other half of the experience is so interesting, because beneath its utterly silly exterior, the Worms games are actually highly skill-based strategy games. Take the most basic weapon for example. The bazooka’s range is affected by the wind direction and strength, so actually aiming it is a real challenge. Grenades have timers to take account of. The trusty baseball bat is a reliable option, but if you can’t use it to launch an enemy worm into the water (an instant kill), then it’s not going to do much damage. Actually mastering Worms is a process, and while that might sound at odds with its humorous trappings, in actually fact the two ‘sides’ to the game work well with one another; the humour trappings make the game appealing enough that you’ll want to put the raw hours in to actually master it and then compete with friends – both in local multiplayer and online.

Where Team 17 has struggled over the years is in evolving the Worms formula from right back in 1995. A few years ago there were some ill-fated efforts at bringing the series into three dimensions, which Team 17 subsequently backed away from. There was also an effort to make fortresses a big focus, and that one didn’t work as well as fans might have liked either.

The ‘gimmick’ in Worms W.M.D is the vehicles that your worms can jump into. Battlefields have tanks, helicopters, and other machines that will give your side a significant manoeuvrability and weaponry advantage, and really do a good job of concentrating the action in a battle around a single point. Given you can have games with up to four teams, what I’ve noticed is that the other sides tend to gang up on whoever claims the war machine, which means the advantage that they provide needs to be really carefully managed, else it becomes a poisoned chalice. As someone who has watched as my gaming friends have slowly soured on Worms over the years, to see this one get people playing for hours on end again is proof that when it counts, Team 17 has really found some form again. 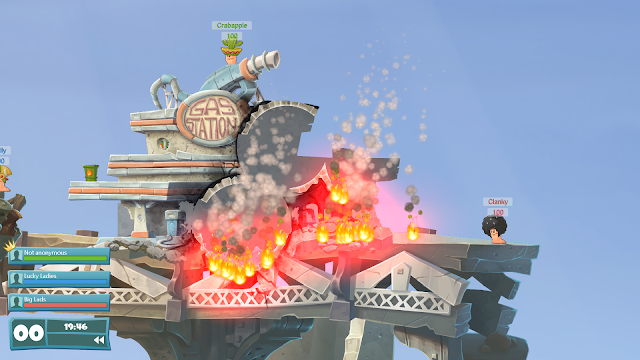 It’s a fully featured game, too, which makes it easy to play for those long sessions. There’s nine different themes for battlefields, and those battlefields can be randomised to suit all different kinds of challenge levels. AI can be used to fill out numbers if you haven’t got enough. And there’s plenty of single play and online multiplayer to get stuck into too.

Best of all, though, this game really fits with the hardware. Being able to pull the Switch out for an impromptu multiplayer session on the train or plane is a major feature of the console, and a game like Worms, which is simple in terms of controls and not so graphically intensive that it suffers for being on the small screen, is the perfect example of what the Switch is about. You can play on the TV for long play sessions because there’s enough to it that players can be competitive – and have a good time at all skill levels. But then for those short bursts of time wasting fun, it’s every big as perfect.

There’s not much else I can say about Worms W.M.D. It’s Worms, and Team 17 has done a good job in restraining itself this time around so that the only gimmicks within the game genuinely add to it. What’s important to note here is that the Nintendo Switch is absolutely perfect for Worms, and that fact alone makes this the best entry in the series in years.